Microsoft’s Internet Explorer did manage to carve out a bit of an unwanted reputation for being slow and incompatible, but its replacement, the Edge browser, is much more appealing.

In fact, based on new data released by Microsoft, we can look to Edge for the best battery performance of any of the popular browsers when used in conjunction with the latest Windows 10 Fall Creators Update. 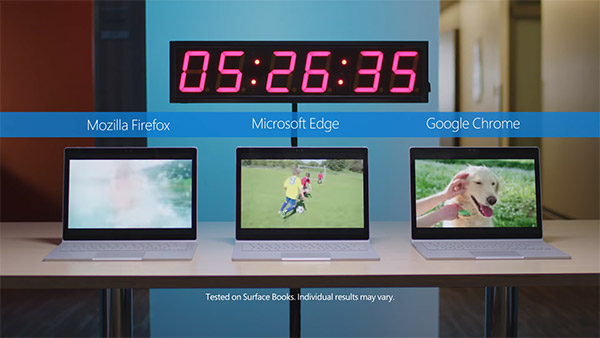 Using the same procedure that it previously used back in April, which amounts to running a continuous loop of HTML5 video, Edge proved to be capable of lasting around 19% longer than Google’s Chrome and a massive 63% longer than Firefox.

Just to put Edge into an even better light, Microsoft is also claiming a faster and safer browsing experience than Chrome, citing Apple’s Jetstream 1.1 benchmark and an additional NSS phishing site report.

While these numbers, and that security, are impressive and Microsoft should absolutely be lauded for what it has done with Edge, it is unclear that many will truly see this as a solid reason to make a switch away from something like Chrome. Google took the browser market by storm on the back of historical Internet Explorer inadequacies, and people have long memories. Still, the news that Microsoft has been able to turn around what was left of Internet Explorer and offer something so solid in Edge is great news for the company. However, Edge has, of course, struggled to gain traction no matter what, so far.

Google’s Chrome still accounts for around 60% of the browser market, and worryingly for the competition, that percentage only continues to increase with time.