Meet The Apple Watch From 1995; You Can Buy One Right Now! [Images]

Consumers are anxiously waiting for the release of the Apple Watch, but it seems that right at this minute in time it’s a twenty-year-old timepiece that’s attracting the most attention. It’s a little known fact that the intelligent timepiece announced by Apple in September of this year isn’t actually the first watch to bare the famous Apple logo. In fact, over the course of the Cupertino company’s history there have been numerous watches offered by Apple, although they have usually been created as part of a promotional push for other products. As they wait patiently for the modern Apple Watch to drop, customers are keeping themselves busy by snapping up one of those aforementioned creations, dating way back to 1995, before most of Apple’s product range as we know it even existed.

As well as finding themselves offering quirky designed wrist wear it seems that Apple dipped into various other markets back in the 1980s and 1990s. Back before iPhones, iPod touches and iPads were a thing, a struggling Apple Computers used to promote a range of clothing items, which included sweatshirts, shorts and even a cringe worthy range of sunglasses to protect hardcore Apple fans from the sun’s UV rays. The original ‘Apple Watch’, with its extremely unique design, colorful fruit logo, deep blue bezel, was part of that range and is now being offered in limited quantities with prices ranging from $99 (blemished) to $199 (flawless) depending on the physical condition of the item. 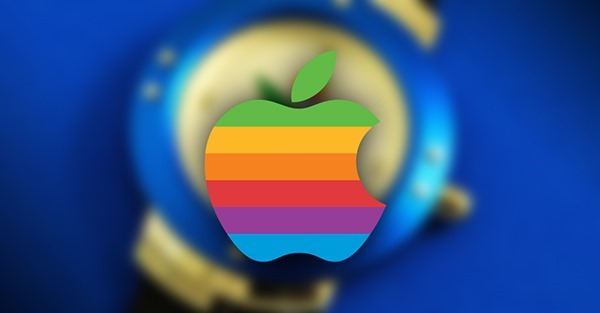 The nostalgia timepieces are being sold off by an original Apple distributor from the mid-90s who managed to keep a fairly decent stock of the watches in its possession. All purchases of the 1995 Apple branded watches will come with a brand new battery installed to ensure that it reaches you in working condition, and although you can’t connect the device to your iPhone, reply to text messaging conversations or read the latest Facebook notification, you will be able to pride yourself on the fact that for a relatively low price you can own a small part of Apple’s history. 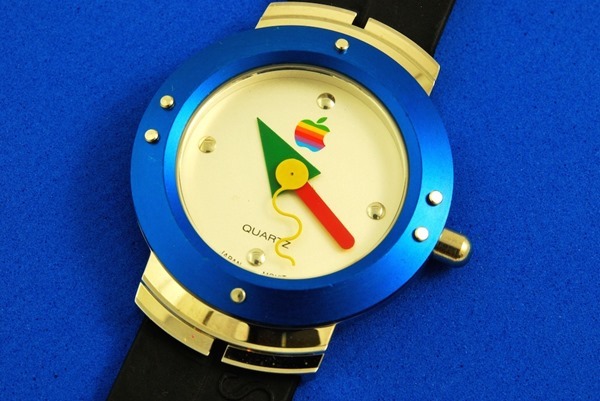 The watches were originally created and launched by Apple back in 1995 as part of a running promotion to entice users into upgrading their Mac computers to the latest Macintosh System 7.5. Running from May to July of 1995, the offer allowed those upgrading to choose either the quirky watch or a copy of Conflict Catcher as an upgrade gift. If the clocks were turned back, which free gift would you choose? 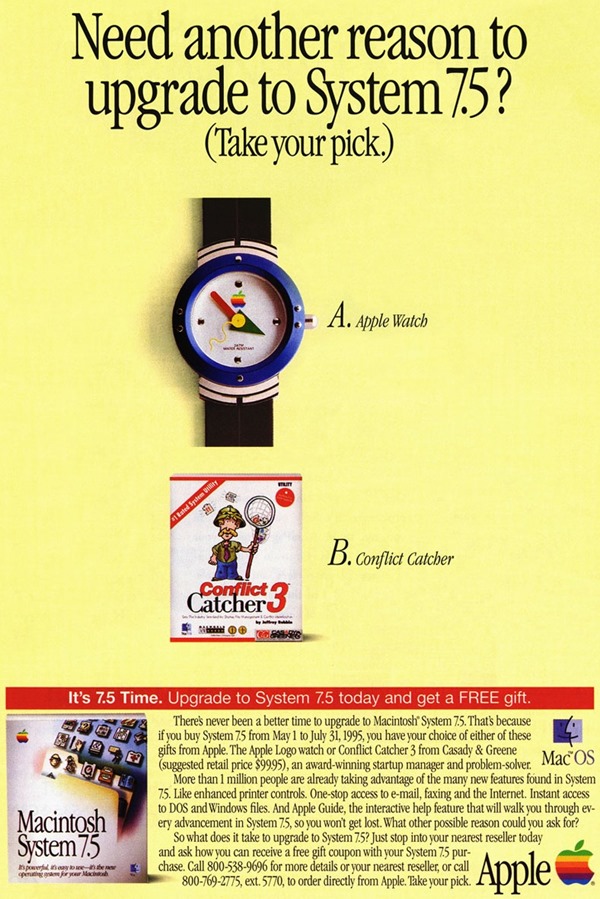