Apple’s gone new release crazy today, with new MacBook Airs, new Apple Thunderbolt Displays and a new release of OS X Lion. Alongside those three though, Apple has also sneaked out an update to its supposed entry-level machine, bringing some fancy new technology to its Mac mini line.

Apple’s Mac mini was once thought of as the gateway drug that many Windows users needed, in order to get them to give the Mac a whirl.

An affordable, monitor-less Mac, the mini was intended to be an entry-level machine that would offer as low a barrier to entry as possible. Something Apple wasn’t known for doing.

Over time, Apple has introduced new models that have increased the Mac mini’s power and storage options, making it a useful tool for many people with home cinema boxes and home servers popular use cases.

The stand-out change when it comes to the newly updated 2011 Mac mini, is the inclusion of two new CPUs: the Intel Core i5 and i7. Alongside the extra power comes an extra port in form of Thunderbolt, which offers lightening (see what we did there?) fast asynchronous data transfers – up to 20 times faster than current USB 2 devices.

There are two base model Mac minis on offer now, both offering the Intel Core i5 CPU as standard, with the i7 being a built-to-order option on the more expensive of the two.

Pixels will be pushed around by an Intel HD 3000 graphics chip, sporting 288MB of memory that is shared with the main system.

The aforementioned Thunderbolt port is present, alongside the usual array of USB, Firewire and HDMI ports.

Stumping up the extra cash gets you the $799 model, which on the outside is exactly the same as the lower-end product.

Internally, you’ll be treated to a 2.5GHz dual-core Intel Core i5 with 3MB on-chip shared L3 cache – upgradable to that i7 2.7GHz chip we mentioned earlier. Memory is also bumped up to a more reasonable 4GB.

While the storage is the same, graphics see a boost to include an Intel HD 6630M part with 256MB of its own DDR5 memory.

Ports and connectivity are the same as its brother.

As expected, both new Mac Minis come pre-loaded with the new release of OS X – Lion. Featuring iOS-like gestures and under the hood improvements, Lion brings the Mac’s operating system up to version 10.7. 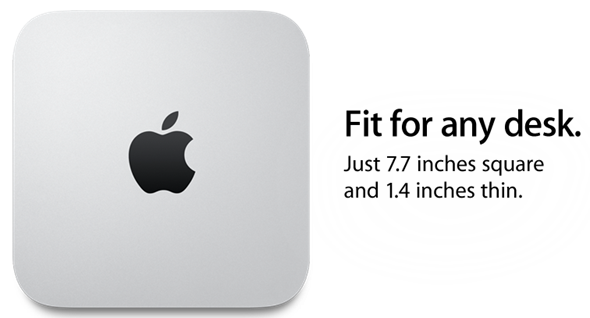 But that’s not all! There’s a third Mac mini hidden in the Apple Store, the Mac mini Server.

Featuring a 2GHz Quad Core i7 CPU and two 500GB 7200 disk drives, the Mac mini Server really is a great little product for those looking to serve content across a network.

4GB of RAM and an Intel HD 3000 sporting 384MB of shared memory make up the remaining specs.

The Mac mini is one of our favorite parts of Apple’s lineup. The new machines pack a punch, at least on paper, and the ability to add your own choice of screen will no doubt appeal to many. The server option adds yet more flexibility to an already powerful little Mac.