According to the software’s release notes, iTunes 10.4 includes support for Lion’s full-screen mode by adding a full-screen button on the top right corner of the window:

You can now use iTunes with OS X Lion’s new Full-Screen App capability, which allows you to use iTunes and other apps without distractions.

Full-screen mode won’t only increase the size of the window, it will actually make the interface smoother, similar to the iTunes app that’s built into the iPad, although with a more distinctive Mac look.

Although not mentioned by the release notes, this new version of iTunes also includes several visual enhancements to make the program blend in better with Lion, including new window buttons and the much-loved iOS-like scrolling which wasn’t available in iTunes before, even on Mac OS  X Lion.

There are some architectural changes as well: for the first time, iTunes is a 64-bit Cocoa app. If you own a relatively new Mac, you should notice that intensive tasks such as importing or transcoding files are significantly faster, although the benefits shouldn’t be that noticeable during everyday use. The release note also cautions that some iTunes plugins might no longer operate due to the architecture change:

iTunes is now a 64-bit Cocoa application on OS X Lion and includes a number of important stability and performance improvements. Some iTunes plug-ins may no longer be compatible with this version of iTunes. Please contact the plug-in developer for an updated plug-in compatible with iTunes 10.4.

Even if you’re not using Mac OS X Lion, you should get this update for improved performance, although you’ll get none of the feature or user interface enhancements of OS X Lion. Nonetheless, for an application like iTunes, any performance enhancement will sure be welcomed by its user base. 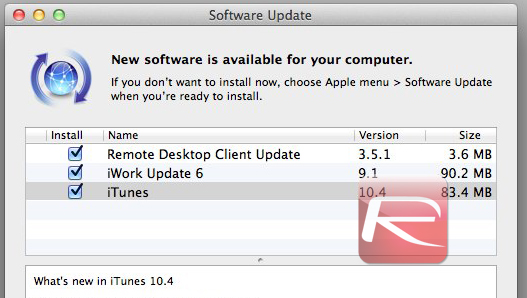 Mac OS X Lion, the newest version of Mac OS X, was officially released to the public today. The main focus of this release, according to Apple, was to bring some of the user interface paradigms from iOS and bringing them to the Mac: the result is a very reliable and multi-touch-friendly operating system.