When it comes to taking digital images, the marketing ploy of many vendors is to simply quote the number of megapixels. Whilst this is obviously an important factor, there are many other prerequisites of a decent quality photo being taken, and although by no means the best, Apple’s iPhone certainly doesn’t perform too badly.

Indeed, when the iPhone 4S first launched back in October of last year, it was the snapper of choice on Flickr – a haven for photography enthusiasts – and although it only has around 24 hours left as Apple’s flagship device before the announcement of its successor, the camera still remains among the best around. 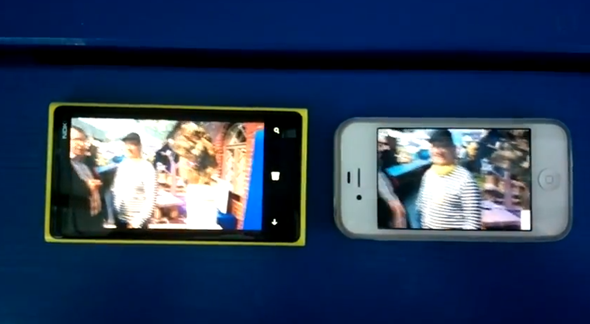 Meanwhile, the Nokia Lumia 920 is one of the most exciting new devices announced over the last couple of weeks, and there are a variety of reasons for this. As well as being one of the very first Windows Phone 8 smartphones, it also has the added pressure of carrying a company’s hopes on its shoulders, and with the Lumia 900 having done a decent job in capturing the imagination on Windows Phone 7.x, it’s down to the Lumia 920 to build on those solid foundations.

Having been announced last week along with the mid-range Lumia 820, the Lumia 920 is a significant improvement on any Windows Phone device we’ve seen hitherto, and one of the greatest features showcased was the camera.

Supplemented by a PureMotion HD+ display, the 8.7-megapixel rear camera boasts Nokia’s lauded PureView and Carl Zeiss optics implementations, offering clarity and brightness thanks to floating lens technology. It all sounds rather exciting, but as I said before, a camera is judged on real-world performance as opposed to a multitude of specs, and CCInsight managed to get a hands-on look of the Optical Image Stabilization of the Lumia 920 at Nokia World 2012.

He compared it with the Digital Image Stabilization on the iPhone 4S, and rather unsurprisingly, the Lumia completely steamrolled the aging iPhone, as you can see in the video clip of the test:

As well as trouncing the iPhone 4S, it’s also worth noting the iPhone 4S was held in his right hand, with the Lumia 920 in his left hand – which might render the test a little bit unfair. But, a test is a test, and we have it.

Of course, old hardware versus new is never fair in itself, but it’s certainly interesting to see how much work Nokia has put into its latest flagship.