LG G5 Confirmed To Have An ‘Always ON’ Display

Smartphone manufacturers will do anything within their power these days to ramp up excitement for a new release. Companies like Apple and Samsung more often than not don’t actually have to do any kind of social media-based marketing prior to launching new hardware, but that luxury doesn’t apply across the board. In an effort to promote its latest flagship – the LG G5 due to be unveiled during this year’s Mobile World Congress in Barcelona – LG has taken to Facebook to post a teaser GIF animation that highlights the device’s “Always ON” display feature.

The posted GIF is clearly designed to tease and raise excitement levels ahead of the hardware’s February 21 unveiling during Mobile World Congress. Rather than featuring actual images and device interactions, the posted animation merely shows an outline of the G5 hardware, and features the “Never go asleep while others do. LG G5, Always ON” caption. It’s likely that the caption is purposely a little misleading as the display will not always be fully active. The functionality included will ensure that owners will always be able to view some arbitrary information on the screen without having to bring it to life. 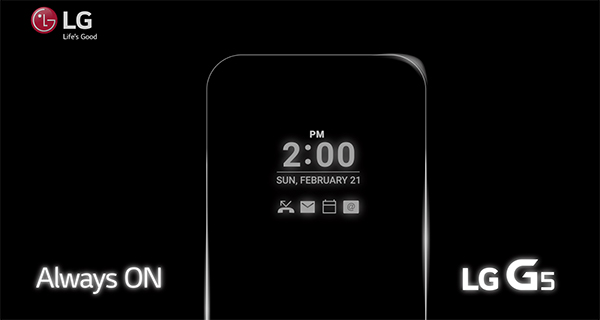 LG may be attempting to break away from the norm with the G5 in terms of introducing a new design with new and presumably unique features, but this isn’t the first time a manufacturer has attempted the “always on” display angle. The Moto X introduced the first out-of-the-box solution for allowing users to view notifications and specific information while the device is asleep or in standby mode. Given the fact that LG feels the need to post a teaser specifically relating to it, we’re hoping that the company has built a solution that is more innovative and functional than integrations that we’ve seen in the past.

In addition to the promoted “Always ON” display feature, speculation has it that LG will be banking on a new aesthetic and a unique accessory slot at the bottom of the G5 to garner global attention. A design drawing leaked back in mid-January, also hints at the relocation of the iconic volume button from the back of the phone, to the left side. It’s likely that concrete information on these supposed changes including more information will become known during LG’s presentation at Mobile World Congress on February 21. Given the state of the company’s mobile business, it really needs a commercial success with this one.