Bound for an April release this year, the Apple Watch is one of the most anticipated products to be coming out of the Apple camp since the original iPhone. As has become a custom in recent years, courtesy of the booming Chinese industry, Apple Watch replicas have come pouring in like there’s no tomorrow. In a recent video released of a replica, we see how close to the actual thing it really is, that is until you fire it up.

Reviewed by UnboxTherapy on YouTube, this Apple Watch replica has been looked at in detail. I could use the word ‘fake’ to describe this Chinese product, but it’s not like the manufacturer even tries to pass it off as the real deal. Where some of the inner workings were pretty obvious, UnboxTherapy uses the opportunity to show us how the Apple Watch would look on your wrist and even compares it to the rest of the available smartwatches once it’s officially released. 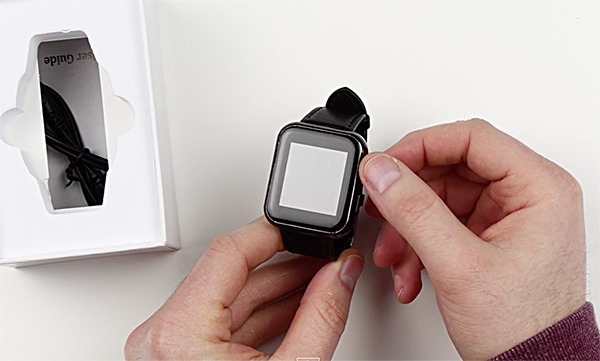 The replica is similar to the Apple Watch on the design front, down to the digital crown which is clickable as well. However, where the slightly larger bezels and a smaller screen may be pretty apparent to you, not everyone would be able to tell from a distance that it’s not the actual deal. With a synthetic-leather strap – just because it’s a knockoff – the overall finish of the product is pretty decent for a replica. Obviously the case would be significantly prone to color coats chipping away and scratches as well.

Firing up the device is where it all goes haywire, with a UI that is simply distasteful when you go into finer details. We can be sure that the same UI is running in some Chinese mp3 player as well, but that’s not surprising. When turned on, the watch booted up with the Mandarin language, which is legit given the units will be sold widely in the Chinese market.

The watch comes packed with features such as a pedometer, dialer, Bluetooth and some anti-steal feature as well. Definitely not worth it for the user experience, but if you happen to buy one during the pre-Apple Watch days, you could always try and prank some clueless friends or colleagues.