A few years ago, it would have been unthinkable for Apple to be preparing official support for gaming controllers on iOS, but the Tim Cook era of the Cupertino company seems a lot more open to new ideas. For quite a while, it’s been of public knowledge that iOS would be allowing third parties to create gaming controllers for iPhones and iPads to take full advantage of the App Store’s increasing gaming prowess, and MOGA’s Ace Power effort looks to have been inadvertently showcased thanks to a YouTube clip.

The touch-based environment is still a commodity to which many are familiarizing themselves with, and since Bluetooth keyboards for smartphones and tablets are still selling by the bucket load – even for iPhone and iPad – it makes sense for Apple to offer official support for gaming pads. As titles become higher-end and thus, more graphically intense, it stands to reason that things are going to get a bit more serious, and with Game Center facilitating multiplayer battles the world over, a physical controller seems a no-brainer.

MOGA looks set to release one of the first such MFi (Made for iPhone) peripherals at some point in the near future, and based upon the trailer, it looks as though it will be called the Ace Power controller. With your usual d-pad, four action buttons, dual toggle sticks and R1/R2 and L1/L2 buttons, it seems to have the pedigree, and although it is quite a large accessory to carry around, it should greatly enhance the gaming experience thanks to its “MOGA Boost Technology” – which grants users extra battery life thanks to its built-in battery back. 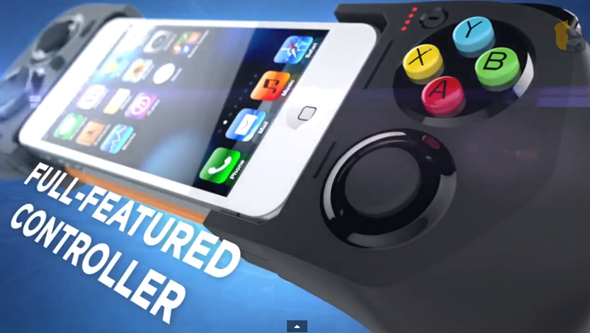 The Ace Power looks as though it will fit the iPhone 5, iPhone 5c and iPhone 5s, as well as the fifth-gen iPod touch, but we’ll obviously have to wait for some official info before we can learn if any other models are supported.

Meanwhile, Evleaks has also been dropping hints via Twitter about Logitech’s forthcoming effort, which will possibly be given the “Powershell” moniker.

If you’re a big-time gamer but the touch display element has dissuaded you from investing heavily in iOS, perhaps these controllers may sway you, and as we await the release of our first MFi device, check out the leaked MOGA trailer below: