We’re getting closer and closer to the expected September 10th announcement of whatever Apple ends up taking the covers off of, and the rumors and leaks are just beginning to really gather pace. At this point it’s difficult to believe that there is a great deal that Apple will be able to spring a surprise with, but that isn’t going to stop the leaks from coming.

The latest leak comes out of a post on French site NoWhereElse, which claims to have a photograph showing a bunch of iPhone 5C handsets in final testing.

For those that have been living on the moon for the last few weeks, the iPhone 5C is the supposed ‘cheap’ iPhone that will replace the iPhone 5, with the iPhone 5S being the new top of the range affair that we will all want. Complete with a new golden finish and 128GB of flash-based storage, the 5S is expected to be quite a handset, especially when the claimed fingerprint sensor is added to the equation.

Now that the catchup is out of the way, what about this photo? Well, it appears to have originated from a Pegatron employee at the company’s Shanghai plant. Posting to the Chinese social network Sina Weibo, the unnamed and probably now unemployed worker posted the image which appears to show a collection of white iPhone 5C handsets during the final stage of the QC procedure along with a short caption:

"The low-end iPhone 5C to be launched for Chinese consumers in September doesn’t look much different than the Xiaomi Phone 2, right?" 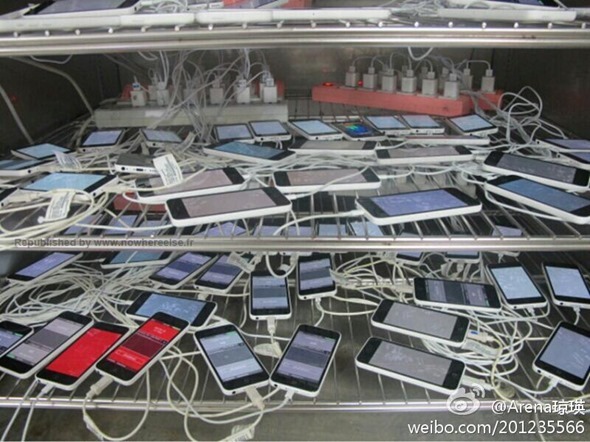 Having just Googled the Xiaomi handset, we have to say the poster does indeed have a point.

At this point we don’t know whether this photo is legitimate or not, but the consensus across the internet right now is that it might have something to it, even if it does look like the phones pictured have been dumped from a great height!

On a related note, the white iPhone 5C models supposedly shown in the photo appear to have a black face, something that will no doubt upset purists but could also point to Apple trying to differentiate between its cheaper 5C and more premium 5S handsets.

We’ll know more come September 10th, but until then we’ll just have to keep our eyes peeled for more photos. At the rate things are leaking right now, we’ll probably see the slides from the announcement event, too.