While we were focusing on and vouching for the Samsung Galaxy Note 4 and Galaxy S5 to be getting the Android 5.0 Lollipop update, the Galaxy S4 has jumped right in. The device has been seen running Android 5.0 with the new TouchWiz UI layered on top.

Samsung is really pushing hard for releasing Android Lollipop as soon as possible on its major devices, which until today were seemingly the Note 4 and S5; given the recent video and report leaks. This time around, SamMobile – that believed that Samsung was already testing Lollipop on the Galaxy S4 a week back – has managed to get its hands on a leaked Lollipop firmware for the device for some testing. 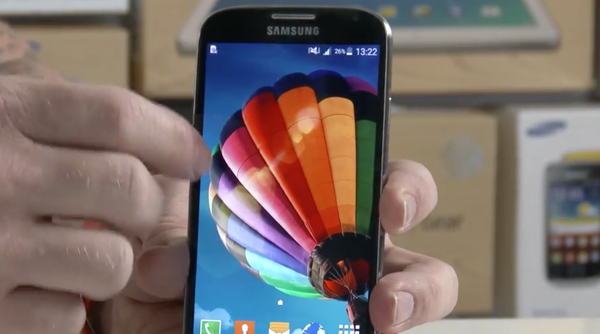 According to them, the device is – for obvious reasons – not at all suitable as a daily driver as it is in the earliest stages of testing at Samsung and contains its fair share of bugs. Citing this reason, SamMobile has decided to not go ahead with leaking this release to the public, in a similar fashion to when it tested the Lollipop build for the Galaxy S5.

SamMobile says that Samsung has made tremendous progress as far as a first build is concerned. The Lollipop optimized TouchWiz UI seen here for the S4 is pretty much the same found on that build seen for the S5, including the launcher itself, My Magazines, popping colors for the lock screen effect, and the overhauled system apps such as phone, messaging, calendar etc.

Again, we see that Samsung has gone with the older Lollipop code (LRX02E) instead of the final LRX21M one which Google released around three days earlier. Even with the bugs that are expected from a test build, the OS seems to be much faster than Android KitKat with better memory management.

All that said, we can’t be too sure of what the final product may end up on release date, but it’s good to see Samsung working hard on updating their devices to the latest Android OS at a quicker pace in comparison to the earlier days. With the Lollipop update speculated to be around late November or early December, it is likely that we may see the update roll out to the S4 in the following few days.