Kodi users, do you have TVAddons.ag repo still installed? If so, you may want to remove it as it poses security risk now after being shutdown. Here are the details on it.

All the furor regarding the perfectly legal Kodi media center software and the not-so-legal uses for it has been almost impossible to avoid over the past few months, with many prominent Kodi add-on creators being taken to task over their work and what it is used for.

With so much illegal content available via those add-ons, including live sports games that would normally command a subscription or one-time fee, it was only a matter of time before the authorities went after them. With that happening now, a new security risk has emerged after it was found that one prominent add-on’s web domain is now owned by a Canadian law firm.

The popular add-on repository TVAddons is in the middle of being sued via a court in Texas, and as part of that process it has become apparent that TVAddons’ domains, TVAddons.ag and Offshoregit.com, are now owned by a Canadian law firm.

While on the face of it this may not immediately raise any alarms, the potential is almost certainly there for the law firm, or anyone else who may buy the domains in the future, to use them in a variety of nefarious ways. With countless Kodi boxes likely still trying to connect to those domains in an attempt to download updates for add-ons, someone with control over them could use those boxes as a distributed botnet for example, if they were to install the correct software onto them. 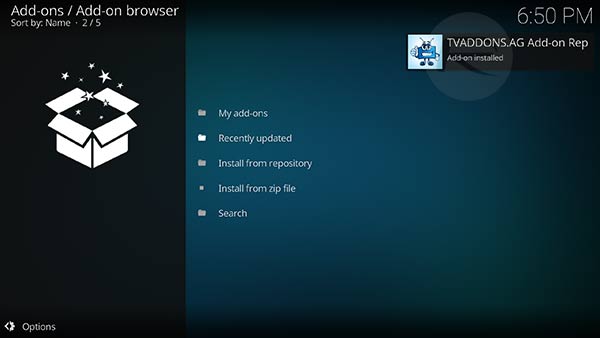 While a law firm is obviously very unlikely to do that, it could in theory use software that would log and then report back anything that a Kodi box is used to view, effectively giving an insight into any illegal activity that may be going on.

In reality of course, it is most likely that the domains and control of them have been passed over to the firm as part of the ongoing legal process in Texas. But still, we’ll recommend removing TVAddons.ag repository while you still can (provided you it installed in the first place) just to be on the safe side!