After years of being rather cagey in adopting new technologies, Apple really seems to be making much more of an effort to drag its products up to speed, offering consumers a better inventory of hardware for their day-to-day digital errands.

A shining example of this would be, of course, the new iPad. Released last month, it was certainly third time lucky for consumers, who were finally treated to a true high-definition display, 4G LTE technology, as well as a decent camera. Those features – especially the LTE – have been around for some time, yet the fruit company held off from early adoption, allowing rivals to take the helm (and make the majority of the mistakes). A job vacancy posted on Apple’s website indicates Tim Cook’s company is now looking for a "Computer Vision specialist to strengthen its multi-view stereo research group," with a vested interest in "Computer Vision, Image Analysis and 3D geometry." Considering the position is described as seeking an iOS Software Engineer, we can, somewhat, rule out any of the Cupertino outfit’s unconfirmed connected TV ventures. 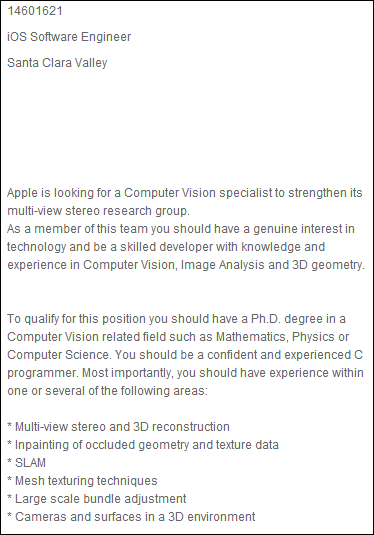 Indeed, the listing appears to point towards a delve into 3D technology for its iDevice range. There’s not a big market yet for 3D phones, but since HTC and LG already have 3D devices on sale, Apple won’t want to wait around for too long to discover just how large the market could grow.

Their listing provides precious little else in terms of giveaway information, but from a company as tight-lipped and covertly-operational as Apple, we’d expect nothing less.

Some reports have suggested Apple could implement the technology into the new/next iPhone, but considering October would seem the most likely month of release, one would have thought Apple would want to take a little more time perfecting the implementation first.

The jury remains out on 3D technology as a whole, and it remains to be seen whether it will ever take a stronghold on the market, or simply fade out like the passing fad some analysts have labeled it to be. This isn’t the first time we’ve heard murmurs of Apple going down the 3D tech route, and, even if it’s not a near-future plan, the rumor mill will likely still be churning out nuggets of info.