JailbreakCon 2012, which not only offered jailbreak enthusiasts the chance to learn from the best by means of various workshops, but once again displayed to the world what a thriving and talented community the scene has forged over the past few years, and with the likes of Saurik, Pod2g and iH8sn0w all giving speeches, it was always going to be an event to remember.

Just like last year’s event in London, Redmond Pie was among the main sponsors for the event. Things kicked off in South San Francisco Conference Center with Aaron Ash who, among other things, gave us an insight into his new app – a Twitter client by the name of Flurry. A prominent creator of jailbreak tweaks in the past, he spoke of the pros and cons of developing and publishing to the App Store versus the Cydia Store – making some interesting points in the process.

Describing a typical developer’s dilemma, he sees the App Store as advantageous because the audience is colossal. Hundreds of millions of iOS users download apps from the official hub, meaning the potential revenue is naturally increased along with the reach, although the glaring advantage of catering to the jailbreak scene is the freedom allowed, since there’s no stringent moderation involved at any stage. 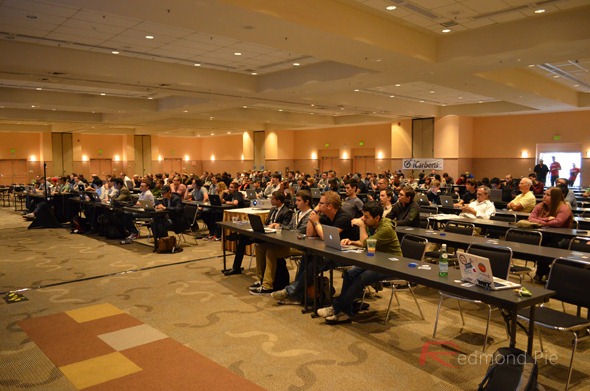 After a slight recess for a technical hitch, Josh Tucker  – former writer for ModMyi and Engadget – took to the stage, injecting a dose of charisma and energy into proceedings  An expert in native implementations, he took the wraps off three interesting tweaks he’d been working on, and each looked exciting in equal measure. Emblem, which was released immediately, offers Mountain Lion-esque notifications to those running a jailbroken iPad, while Scale allows iOS 5 users to share music via e-mail and Twitter right from their Music app, adding a couple of other music app-related enhancements in the process.

In addition, Tucker also introduced Merge, a nifty little tweak that keeps all iMessage correspondence with one sender within a single conversation. Although Apple’s iMessage service has been a great success since launching a year ago, split conversations between a user’s e-mail and cellphone number is something of a flaw, and Merge certainly clears up an area Apple has failed – as yet – to do so.

After a break, iFile mastermind Carsten Heinelt was back for the second year running as Aaron Ash before him, and spoke of the success of his must-have jailbreak tweak. With 20 million downloads to date, it’s one of Cydia’s main success stories, and although the vast majority of those download are of the illegal variety, Heinelt remains positive about his endeavors.

Since iFile uses root to access every file on an iPhone, it’s something Apple would never approve, so he has little option but to develop it for the jailbreak scene. However, it stands alongside SBSettings as one of the all-time Cydia favorites, and with improved Dropbox support coming before the end of the year, it’ll continue going from strength to strength.

Next, Cyril (@pod2g on twitter) – one of the scene’s most influential members – gave attendees an insight to his vast knowledge, and spoke of, among other things, the Corona exploit for iOS 5.

The fifth edition of Apple’s mobile operating system had been in the wild for a couple of months toward the end of last year, and since many pined for an untethered jailbreak, Pod2g was one of the key individuals responsible for finally offering the utility.

Regarding the iOS 6 untethered jailbreak, he said that there is currently nothing concrete on it yet. But the teams involved would be working on it together in the coming weeks/months.

He also spoke about kernel exploits, talked in great length regarding the jb-install binary, and if you’re intrigued into how a jailbreak comes to be, I highly recommend you checkout Pod2g’s keynote in the re-run of the event, which is now available online (and embedded below). You can also check out our interview with Cyril which we did back in June this year.

Then @iH8sn0w, the guy behind the popular Windows jailbreak tool Sn0wbreeze, iFaith, and others, spoke about the history of iOS, and also highlighted the importance of SHSH blobs and APTickets. Although much of his discussion was heavy on technical detail, it was once again, one of the highlights of the keynote in general.

nitoTV’s talk was eagerly-awaited due to his expertise in the Apple TV field, and although we once again gathered a great background and overview of the scene as a whole, nitoTV stopped short of revealing anything exciting and "jailbreaky" – for now – although added an injection vector for the third-gen Apple TV does exist.

He spoke, of Tweak Week, an experiment last year, which saw developers make like guest DJs on a radio channel and spend a week releasing a new tweak per day, with the rules stating that all tweaks had to be made on the day of release, and of course be open source. It was, as we know, a grand success, and saw each of the half-dozen participating developers release something of note. For those interested in getting involved in the jailbreak scene, the official iOS SDK is an invaluable tool, Petrich continued, and if you do wish to see what it does take to become a developer, Apple’s powerful SDK is an ideal starting block.

After Petrich, @JayWalker9988 – former member of the Chronic-Dev Team-turned-industry-security-expert – gave us an articulate look at the mobile security scene, and having put so many hours into finding holes in iOS software, is all-too familiar with the continual cat-and-mouse battle between Apple and the jailbreakers.

After Jay Walker’s deliverance on the functions and origins of iPhone security, the striking figure of Jay Freeman (a.k.a. Saurik) took to the stage. The mastermind behind Cydia, whom I’d the pleasure of meeting at last year’s event in London, was last up, and once again gave us a varied range of insight to the jailbreak community he helped to build. 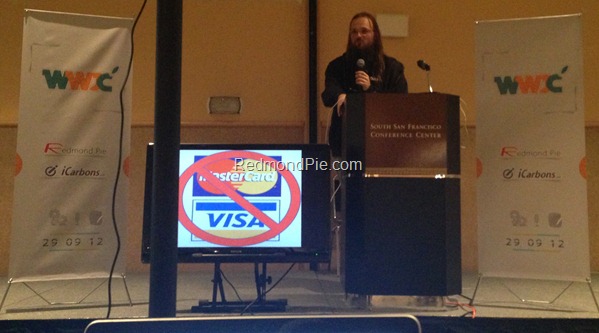 He started off, however, by taking an in-depth look into the business model of Apple, and how its various structures have helped it grow into the world’s most valuable company. As such, he also touched upon AT&T, and how much of the money subsidized contracts make for the Cupertino company when one signs up.

He continues by talking of the sensitive subject of piracy, and suggested those who are involved in such things don’t tend to buy, thus when some people and companies claim huge losses due to a percentage of illegal downloaders, the figures are frequently skewed by the non-buyers.

Although he talks at the speed of light, he’s a very interesting guy, and had a fantastic rapport with the audience throughout his talk. If you watch a re-run of the event at some point, ensure you make time to watch the Saurik’s captivating speech, and prepare to be entertained as well as educated.

Dustin Howett, creator of popular jailbreak tweaks such as Safari Download Manager and CyDelete, both of which are extremely popular within Cydia. Like many developers earlier in the day, he gave his own take on the scene, and described – again in great detail – the trials and tribulations he faced in bringing tweaks such as the above to the polished state they are at today.

@pimskeks from Chronic-Dev Team described his heavily Linux-based background, as well has how he came to work within the jailbreak scene. As you may know, the Chronic-Dev Team is responsible for some of the most important jailbreak utilities including Greenpois0n, and although the group lost member @p0sixninja a couple of months back, pimskeks’ speech demonstrates the group is still running strong, and still working hard in pursuit of the next JB.

All in all, it was another wonderful jailbreak convention, and as well as having learned a lot more about the jailbreak community, I cannot wait to see some of these upcoming projects bear fruit. With no real mention of a jailbreak for iOS 6 as yet (besides the pre-existing Limera1n-exploitable <A4), it will be interesting to see how long Apple’s improved defences will last before succumbing to the work of the likes of Pod2g and chpwn. 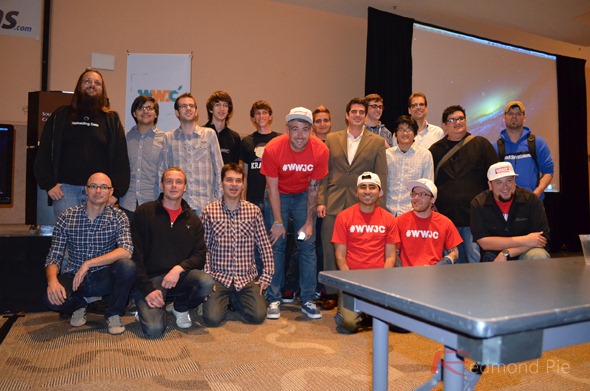 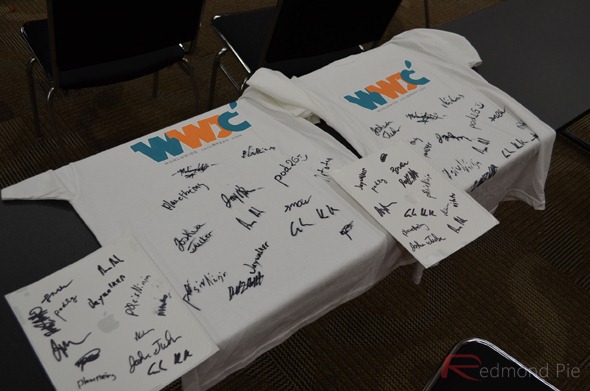 For those of you interested, the third convention will be held in New York next year, as confirmed by Craig Fox, founder of JailbreakCon. 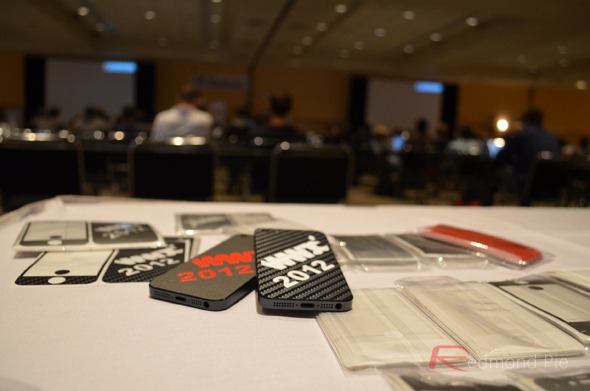 If and when we hear of any significant news regarding the jailbreak scene, you know we’ll have it covered right here, so stay tuned to our coverage here at Redmond Pie!

oh and in case you missed the action, you can relive it again by watching the recorded video of the event embedded below: