Apple continues to dissuade people from having third-party batteries installed in their iPhones or having work carried out by people other than itself or its authorized service centers.

One example of the features that no longer work is the Battery Health section inside the Settings app.

Normally this area would display how a battery is holding up to the rigors of use with a battery health percentage displayed. But if you have a battery installed by a third-party you get a service message instead.

Unable to verify this iPhone has a genuine Apple battery. Health information not available for this battery. 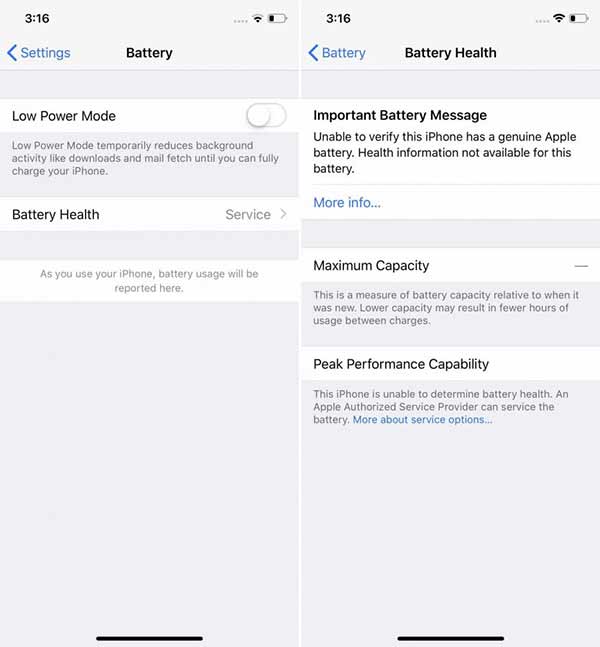 It’s important to note that this does not stop the battery from functioning, and it also happens even if an official battery is installed. The trigger appears to be when any battery is installed by a third-party technician. A Texas Instruments micro-controller, placed on the battery itself, appears to be the root of this move. If the authentication key provided by the battery does not match the one expected by the logic board, the service message appears.

Put simply, Apple is locking batteries to their iPhones at the factory, so whenever you replace the battery yourself—even if you’re using a genuine Apple battery from another iPhone—it will still give you the “Service” message.

The only way around this is—you guessed it—paying Apple money to replace your iPhone battery for you. Presumably, their secretive diagnostic software can flip the magic bit that resets this “Service” indicator. But Apple refuses to make this software available to anyone but themselves and Apple Authorized Service Providers.

Apple obviously cites safety and security as the reason behind this move, although that presumably isn’t going to wash with those of the belief that Apple is simply trying to put small repair shops out of business.