From last one month or so, jailbroken iPhone community has remained under constant threats from various types of worm attacks. First time that we warned you about was when a Dutch hacker tried to access jailbroken iPhones through SSH in his native country Netherlands. He offered remedy for 5 Euros. Another attempt was by Ikee, an Australian, who was successful in injecting a worm into jailbroken iPhone’s whose users had forgot to change their root password for SSH. This worm ikee, however, did not cause any harm to the victim’s iPhone, but it laid a foundation for another worm that could harm iPhone users indefinitely. iPhone came under third fatal attack by a worm identified as iPhone/Privacy.A, that targeted jailbroken iPhone’s with default SSH user/password combo. 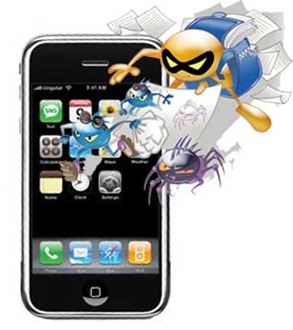 This virus, which gave a hacker complete access on the victim’s iPhone is getting more serious and dangerous now as it has turned into a mobile botnet. A botnet is a number of Internet computers that, although their owners are unaware of it, have been set up to forward transmissions (including spam or viruses) to other computers on the Internet. Any such computer (PC or a mobile) is referred to as a zombie.

Security.nl (found via WMPoweruser) is now reporting that this virus is now spreading from Australia and infecting iPhones in the Netherlands, Hungary, Portugal, Brazil and other countries; affecting thousands. It gives a hacker complete access on the victim’s iPhone. The hacker can access and copy any user data from the jailbroken device, including emails, contacts, calendars, photos, SMSs, videos, in fact any data the hacker wants. It then initiates a search for other vulnerable iPhone’s on the same network to spread itself further, draining the iPhone battery in the process. Earlier posts of ours had already suggested you on how to secure and how to protect your iPhone against such vulnerabilities. The key to safety is; change your iPhone root password for SSH from “alpine” to something else.

We strongly recommend that you change your iPhone’s default SSH mobile and root password now. A complete step by step guide on how to change your jailbroken iPhone’s SSH password can be found here.