It’s a sad fact of the fast-moving tech world that a device doesn’t even need to have released nowadays before we deem it acceptable to begin talking about its eventual successor, and despite the iPhone 5s being lauded by many as the best thing since sliced bread, we’ve already heard reports of the next iPhone boasting a larger display. Until we have any solid evidence, though, everything we hear or see is more than likely the figment of somebody’s imagination, and the concepts below, which are most certainly conjured from deep within the creative minds of one design agency, show us what a curved iPhone 6c, alongside an iPhone Air, may look like.

The concept designs are the handy work of Italian design outfit SET Solution, and the first, called iPhone Air, shows us what the iPhone 5s could look like if it borrowed some of the new iPad Air‘s design language. The full-size Apple slate has benefited greatly after stealing its form factor from the iPad mini, and although this concept is somewhat unrealistic at the moment in that, even by Apple’s standards, it’s infeasibly thin, it does look absolutely stunning. 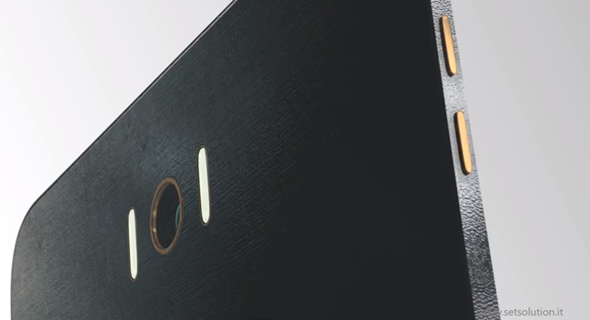 The tapered design starts at 1.5 millimeters thin at the top and grows to 3 millimeters thick at the bottom, which would doubtlessly leave it susceptible to breaking, and although it is very much enticing, it would be hilarious to try and see somebody with average-sized fingers try and use those minuscule volume rockers.

As we know, the iPhone 5s wasn’t the only handset to release this year from Cupertino, and although the iPhone 5c is not held in as high a regard due to its label as a dressed-up iPhone 5 (which, by the way, it is), the below ‘iPhone 6c’ concept takes the ‘c’ moniker and flips it from meaning color to curve.

The likes of the Samsung Galaxy Round and LG G Flex seem to have kicked off something of a revolution, with all kinds of suggestions that other companies would soon be offering curved, or flexible displays. Apple almost certainly won’t be indulging any time soon, so the concept clip you see here is about as real as it’s going to get for now, but with the fruit company having had a patent granted on an innovative looking curved display of its own, it could certainly happen at some point.

Thanks, Jim for sending this in!