Every year, Microsoft holds its BUILD conference, consisting of a series of workshops for developers as well as a few keynote speeches outlining upcoming products and releases. Next year, BUILD will be held from April 2nd to April 4th in San Francisco, the Redmond company has confirmed, and with talk already circulating about the next version of Windows and indeed, Windows Phone, the conference will certainly mark a significant couple of days in the tech calendar.

With CEO Steve Ballmer now outgoing, 2014 will be a big transitional year for Microsoft, and with BUILD taking place in early April, most of the attention will be on what Microsoft plans to do with the next edition of Windows. Having recently switched its release cycle in order to offer more regular updates, Windows 8.1 has already provided some much-needed alterations from last year’s Windows 8 drop, and although the rumor and speculation pertaining what’s next has already begun and will continue to increase as the months go on, April 2nd will provide some clarification on matters. 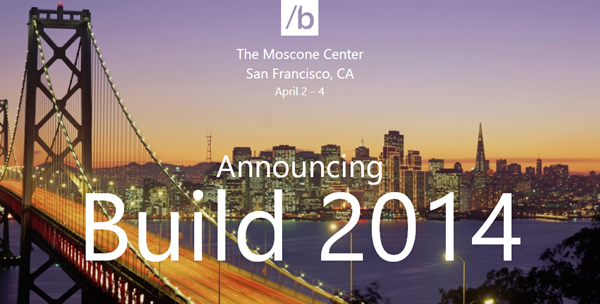 The dates for BUILD 2014 are now officially confirmed, or officially official, depending on how you look at it, and are now plastered on the face of its official website. The new banner states that the conference will be a three-day event held from April 2nd to 4th, and that devs will have the opportunity to register for tickets as of January 14th 2014 at noon Eastern Time, and are priced at $2095.

As well as offering insight on Windows 8.1’s successor, which is believed to be called Windows 8.2, the software maker will also give the Xbox One Dashboard its first major update, although whether it will be just announced or released at BUILD remains to be seen. The Xbox One only hit the market last month, but having managed to sell an impressive two million units in less than three weeks from that launch, Microsoft will need to continue improving operability and bringing in new features if it wants to remain in contention in its battle with the PlayStation 4. 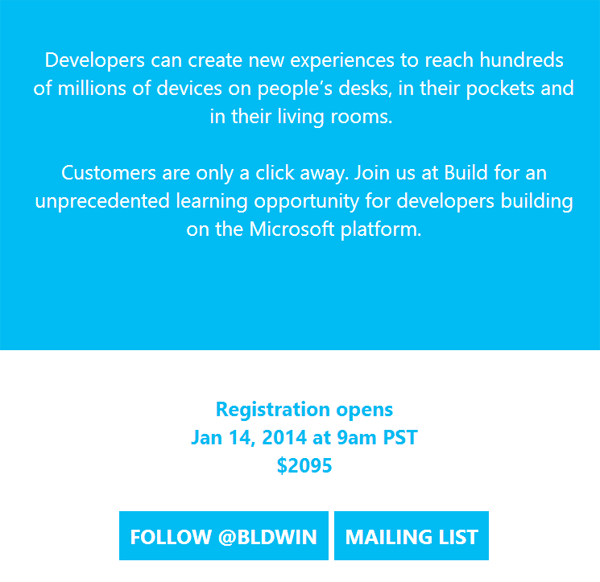 On the hardware front, there’s talk of a smaller Surface, and with the company having purchased Nokia back in early September, gadget fans could really have something to savor from BUILD 2014.

For more details and registration, head on over to: buildwindows.com