iPhone 8 Edges Past Other iPhones In LTE Speed Test

Apple’s iPhone 8 and iPhone 8 Plus are now up for sale and available to buy around the globe, and as we get closer to a full week of the devices being in stores, the folks at Ookla have been able to collate some information gathered by its Speedtest.net tool, one which is used by people who want to test the network performance of their computers, tablets and smartphones.

People with new iPhone 8 and iPhone 8 Plus handsets have predictably been using the tool to check how well their cellular connections have been performing, with Ookla collecting the data and creating a comparison with other iPhones in order to see how well the new handsets do in the aggregate. As it turns out, they do pretty well.

According to the data collected by Ookla, those with Apple’s latest and greatest can expect around a 10% increase in cellular speeds in the United States, while those living in Australia may see as high as a 25% increase thanks to the way their cellular networks are configured.

That’s a pretty hefty increase, of that there is no doubt. Predictably, however, PCMag, the publication given the data by Ookla, has compared the iPhone 8 and iPhone 8 Plus data with other smartphones to see how well they fare, particularly the Galaxy S8 and Moto Z2 Force.

The iPhone 8 is missing one of the components needed for gigabit LTE, or LTE category 16, in the US. The Qualcomm X16 modem can do Category 16, as we’ve seen on the Galaxy S8 and Moto Z2 Force. The phone supports 256QAM encoding and 4x carrier aggregation to 80MHz of spectrum, but not 4×4 MIMO antennas, which would improve both speed and signal strength. In theory, that would make this an 800Mbps phone, also known as LTE category 15. 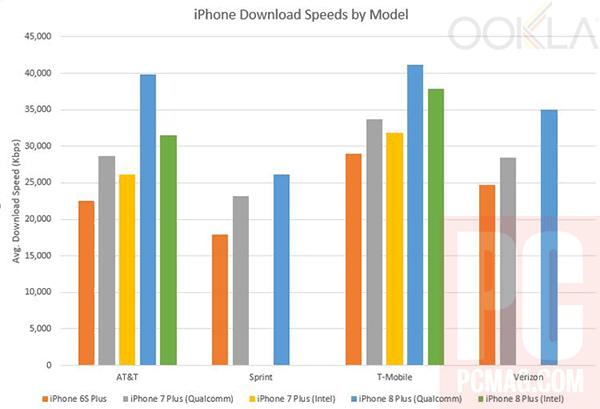 The lack of 4×4 MIMO antennas could result in poor recovery when coming out of dead zones, which, unfortunately, is something iPhones have suffered from in the past. The unreleased iPhone X will be in the same boat, too, meaning the best way Apple can improve future phones’ reception still remains the implementation of 4×4 MIMO antennas.