In an ideal world, Apple would surprise the world this coming September by introducing a new iPhone with an array of new and exciting innovative features packed into an overhauled aesthetic. As most of us already know, we don’t live in an ideal world, meaning that we will likely have to settle for an iPhone 7 that looks quite a bit like the iPhone 6s, and that will ship with some definite improvements, but nothing overly groundbreaking. To that end, a new rendering based on earlier leaked blueprints, gives us an insight into what the iPhone 7 Plus could look like when it arrives this coming fall.

It’s actually a no brainer, but one of the benefits of actually being able to base a prototype on official documents leaked from within Apple’s supply chain is that you actually get a realistic view of what the product will look like when it eventually hits the market.

Renders and concepts are perfectly fine, and are actually fun when it comes to seeing what artists and designers would “like” to see from a future iPhone model, but they generally have no basis in reality. This prototype on the other hand uses what are believed to be official CAD schematics to showcase three major physical changes expected with the iPhone 7 Plus.

First and foremost, the prototype highlights the belief that the next iPhone 7 Plus will ship without the iconic 3.5mm headphone jack that has been an ever present on all iPhones ever released since the original back in 2007. The removal of the audio jack would mean that Apple would extend the capabilities of the Lightning port to cater for power, data and audio transfer. This is one change that if and when made, will also transcend to the smaller 4.7-inch iPhone 7 as well.

Additionally, the prototype pays reference to the belief that Apple will introduce a dual-lens camera system for the iPhone 7 Plus – or iPhone 7 Pro as some believe it will be called. The smaller 4.7-inch iPhone 7 will likely come with an improved camera that will offer better quality in low-light conditions, but it’s unlikely to offer a dual-lens system. 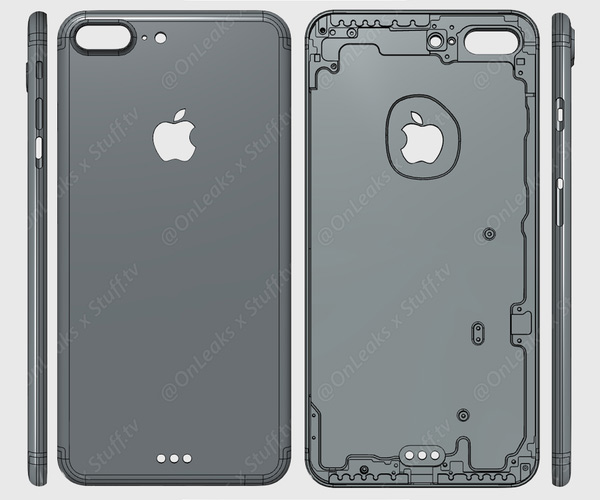 Finally, we focus on the visibility of what appears to be the presence of a Smart Connector dock on the iPhone 7 Plus. Originally introduced with the 12.9-inch iPad Pro, then added to 9.7-inch iPad Pro, the Smart Connector essentially allows a whole new breed of smart devices and accessories to be connected to the device, such as Apple’s new Smart Keyboard. Once again, the smaller iPhone 7 will not be furnished with this functionality.

Check out the video and prototype for yourself and see what you think?