We’re starting to see an increasing number of leaks fall into the public domain that claim to provide us with an insight of what to expect from Apple’s next-generation iPhone. Some of those potential feature integrations and design amendments are enough to raise excitement levels ahead of Apple’s official reveal this coming September. Designer Jermaine Smit has clearly been taking a keen interest in all of the speculation pertaining to the iPhone 7, and has taken the liberty of creating an iPhone 7 Plus concept design that integrates and visualizes a number of the features predicted for Apple’s next-generation iPhone.

One of the instantly noticeable additions to this particular imagining of the iPhone 7 Plus is the wider camera aperture on the rear of the device. Smit has included this as per his belief that Apple’s larger iPhone 7 model will go to market with a dual-lens camera module that will look to utilize improved hardware and software tweaks to introduce a dramatically improved photography experience to consumers opting for the larger 5.5-inch device. Multiple sources have suggested that Apple will use the dual-lens camera as a main feature improvement over the standard iPhone 7 model. 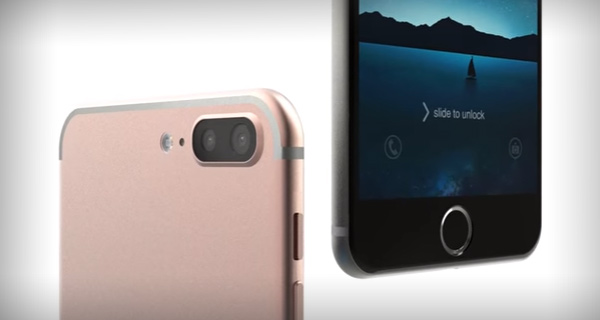 iPhone owners with an eye for design detail will also notice the lack of any visible antenna bands on the rear case of the concept. We’ve been hearing a lot about Apple’s internal decision to move these antenna bands away from instant visibility as part of an effort to introduce a seamless, unbroken design on the rear of the upcoming iPhone. A number of case and design leaks seem to suggest that the antenna on the new device will be located at the top and bottom of the curved shell, as shown in Smit’s concept.

But what about the audio on the device? Which direction has the designer taken where sound is concerned? It won’t surprise you to hear that the 3.5mm headphone jack has been removed entirely, with a secondary speaker being added to the device in place of that headphone socket. That would give the iPhone 7 Plus a dramatically improved audio capability and while it is likely that Apple would throw in some Lightning-compatible EarPods, Smit has ditched Apple’s proprietary connector, replacing it with a USB-C port. This in all honesty, seems highly unlikely for now.

Missing on the back of the phone though is the Smart Connector which should allow the phone to connect with a host of smart accessories from Apple. This has almost been a regular as far as iPhone 7 Plus speculations and rumors are concerned. Other than that, the design seems to be in line with existing rumors, with minimal changes to the exterior compared to the iPhone 6s and 6s Plus.

Checkout the concept video for yourself and see what you think. If Apple released an iPhone 7 Plus that looked and functioned just like this, would it convince you to part with your hard-earned cash?