Gone are the days when a large company can work silently on a new product and surprise the world with its introduction. We sometimes look back affectionately on the days when the unveiling of a new smartphone, tablet or computer were a complete mystery, but not anymore. We already know pretty much everything there is to know about Apple’s iPhone 6s, including a purported release date, but now it seems that we’ve also been given an indication of when the next-generation iPhone will be available for pre-order.

According to a leaked screenshot that has made its way into the public domain, the iPhone 6s looks set to be available for pre-orders starting September 11. The screenshot which made its way onto the Internet, originated in France, and is claimed to be an official capture from a system belonging to one of the French mobile phone carriers who will offer Apple’s next-generation device upon release. There’s no immediate reason to rule this out as a genuine piece of information, especially considering that France is typically one of the first territories to receive any new Apple products. It’s also logical to assume that network carriers would be informed of such a release before hand.

The speculated pre-order date also fits in nicely with the suggestion that Apple is planning on holding a dedicated media event on September 9. In instances where a device has been announced in the past with pre-orders being accepted Apple has typically flipped the switch on those orders within 48-hours of the announcement. The leaked information also seems to corroborate reports that the iPhone 6s will actually be available on physical and digital shelves almost 2 weeks after the initial unveiling on September 9th. 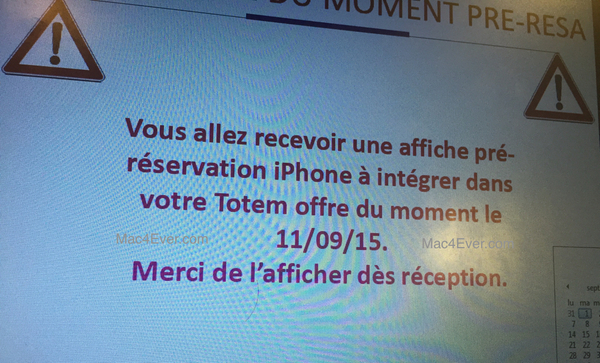 There’s actually little left to know about the iPhone 6s. The majority of the technical specifications have already been uncovered thanks to various component leaks and analyst predictions. It’s really only now a matter of time until Apple issues official invitations to the September 9 media event which will hopefully see the next iteration of the iPhone unveiled to the world. Those excited for the launch of the device can expect to see hardware that’s aesthetically very similar to the current model, the iPhone 6, with the addition of Apple’s new A9 processor, 2GB RAM, 12MP camera, the inclusion of Force Touch technology, among other things.