It’s not uncommon, as has been the case over the past couple of months, for talk of the next iPhone to begin swiftly following the release of the current model. But while we’ve only seen tentative upgrades in terms of the Apple smartphone’s form factor since the original handset arrived in 2007, the talk of two new devices – the larger of which may pack a display in excess of 5.5 inches – has raised more than a few eyebrows. With this in mind, ISI analyst Brian Marshall not only believes that we’ll see unprecedented numbers of consumers upgrading to the new, larger model, but he also foresees scores of Android users jumping ship as Apple finally decides to go big.

Apple’s iPhone range has stayed almost the same size since its inception, and while Android and Windows Phone devices have continued to grow through the generations, the only increase we’ve seen so far from the Cupertino company is the 0.5-inch increase from the panel size of the iPhone 5 versus the iPhone 4s. Even with this decidedly meager enhancement, a large portion of consumers have been hoping Apple will compete with the likes of Samsung’s Galaxy range in terms of display size, and this time around, it’s looking very likely that the company will deliver.

Various reports, corroborated by the likes of Bloomberg and Reuters, have suggested that two new handsets are on the horizon. Depending on where you read, the smaller handset will measure in at between 4.5 and 4.7 inches, while the larger, borderline-phablet device will supposedly boast a panel in excess of 5.5 inches. It is this move to go so considerably larger that has prompted Marshall to predict big things for the big iPhone.

Around half of new iPhone purchases are by those upgrading from an older model of iPhone, but the percentage of iPhone users seeking a new device has been dropping through the last couple of generations due to Apple having not made too many major alterations. Not only will the an iPhone 6 boasting a ~5-inch display have those in ownership of an older iPhone flocking to the stores, notes Marshall, but he also believes that a large number of "Android switchers" will be born, ditching their Samsung Galaxies and HTC Ones in favor of a larger iPhone. 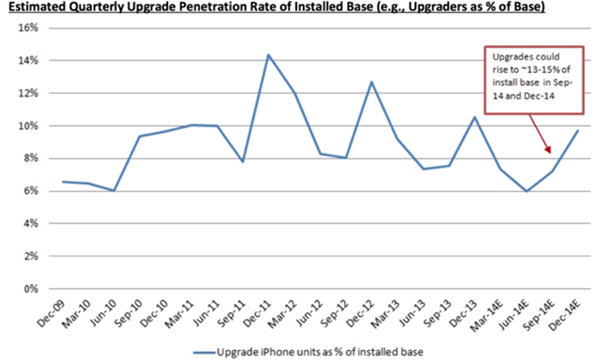 If this was the case, it would certainly cement the iPhone’s position as the most sought-after device on the market, and with the announcement of the Galaxy S5 having been less than convincing from Samsung in the eyes of many, the stage appears set for Apple to cash in.

Do you agree with this analyst’s notion? Be sure to share your thoughts and comments below!