It’s hard to overstate just how successful, at least in the early days, the iPhone 5s has been. Allied to the iPhone 5c, which will also have shifted a few fair units, the first weekend has seen almost double the amount of sales as compared with the iPhone 5, and when you pit the numbers against the first weekend of Samsung’s Galaxy S2, S3 and S4 combined, it’s still not what you could call a contest.

The data on the chart below, which has been collated by Asymco, shows how many units per day the respective flagship devices sold on average over the course of 72 hours. Although the iPhone 5 broke all sorts of records by selling around 1.7 million per day during its first three days, the dual release of the iPhone 5c and, in particular, the iPhone 5s have collectively blown everything else, including last year’s offering, out of the water.

Much is made of Samsung’s Galaxy S range, what with it being the most popular brand of Android handset on the market, but compared with the iPhone’s numbers, it cuts a comparatively paltry figure. Of course, with so many other options available not only on Android, but from Samsung, it is somewhat unfair to directly compare the Galaxy S2, S3 or S4 with the iPhone, but it’s fair to say that with 9 million 5s/5c sold in the first weekend, Apple’s iPhone is the most popular brand by quite some distance. 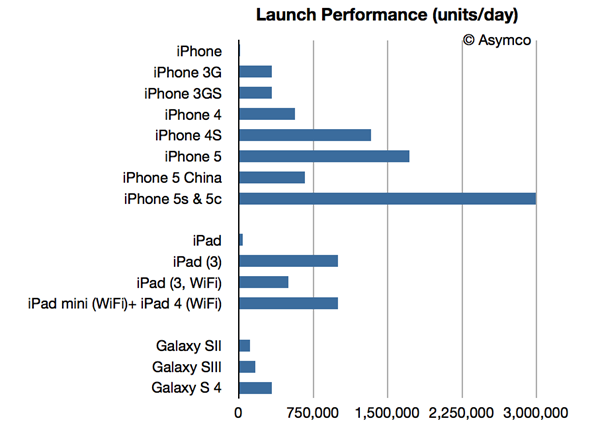 Android continues to have the widest reach of the major ecosystems, but with many having criticized Apple for becoming complacent with its device and software updates in iOS, these sales figures provide a fairly damning response to the naysayers. With a revamped iOS 7 offering an all-new UI and the flagship iPhone 5s brining a plethora of great features including a fingerprint sensor, dual-LED "True Tone" flash, 64-bit processor and M7 motion coprocessor, the just-released handset is packed to the gills, and with many millions more still waiting for further availability before going out to make the purchase, the iPhone 5s looks set to go down in history.

Has the iPhone 5s lived up to its billing? Or is this simply another case of the mass consumer market getting itself in a tizzy about shiny gold finishes and Touch ID? Share your comments with us below.