According to a leaked document from AU, the mobile division of Japanese carrier KDDI, the iPhone 5S will be available to pre-order on June 20th, with a launch shortly thereafter in July. As well as the disclosure of release dates, the telecommunications company foresees the device packing a 13-megapixel camera and iOS 7.

Since Apple tends to be fairly coy right up until the point of announcement, we’re taking this one with a pinch of salt, and having seen umpteen leeks such as this in the past, things can, and often do change at the drop of a hat.

The so-called iPhone 5S will reportedly pack in some kind of fingerprint detecting contraption, a feature Apple is said to be struggling with as it tries to close in on producing enough units to go ahead with the launch. Reports last week suggested Apple returned between 5-8 million handsets back to China-based manufacturer Foxconn due to faults found with the technology which rendered the devices unsellable, and although the source of this leaked document, NowhereElse.fr, is invariably reliant with Apple news, a June announcement would seem incredibly unlikely.

With Apple having announced a 14th June WWDC 2013 date late last week, this document suggests the Japanese carrier may have simply presumed that Apple would announce the iPhone 5S at the event, with the usual sequence of pre-order and launch following thereafter. At the recent earnings call, the Cupertino company’s CEO Tim Cook noted that his company had no plans to release any new hardware until Fall, and although this should perhaps be taken with a pinch of salt given how often execs like to put the spin on things, it does make the notion of an imminent iPhone 5S seem even less convincing.

iOS 7 would seem a standard feature of a next-gen iPhone, but considering that no betas have yet been released, the amount of time for testing prior to release would be severely constrained, and given how many issues Apple had with iOS 6, it would seem strange for the company to now rush proceedings to facilitate a summer release. 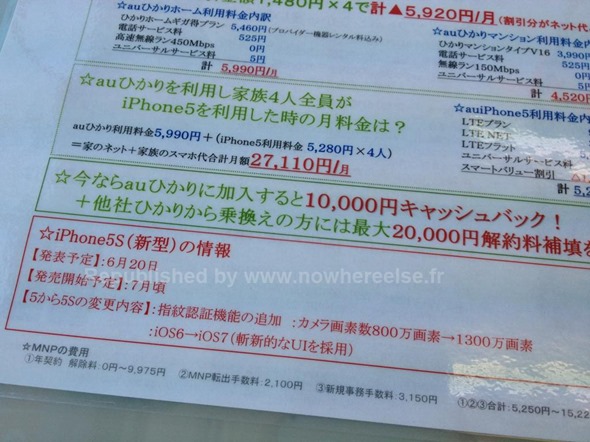 Seeing as the releases in the latter months of the year seem to have gone down well in recent years, I can’t see Apple switching its strategy and dropping the device in July.