Apple’s iPhone 5 may have been a hit with consumers, but with those looking to take photos on the moderately-improved camera, the issue of purple haze has really put a dampener on proceedings. To be fair, the iPhone 5 isn’t the only culprit – the new Google Nexus 4 has also seen similar issues – but despite Apple initially claiming consumers were simply holding their devices incorrectly when taking a shot, it’s something that the smartphone industry needs to tackle as a whole. The case makers have attempted to amend the issue in the meanwhile, and while the camHoodie did a pretty decent job of removing that mauve mist from our snaps, the App Store developers are now trying their hand at sorting the problem.

The aptly-entitled Camera Fix is a cheap solution for those looking to reduce that unsightly layer of haze seen when a shot is taken at a certain angle. It costs 99 cents over at the App Store, and claims to be "the first app to solve the purple-fringe problem on photos." 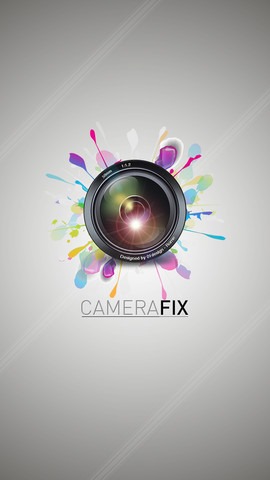 It’s worth pointing out that it doesn’t actually fix the root cause, but instead tries to make your images look as though they haven’t been affected by the haze. Unfortunately, this does mean that the coloring of your images can sometimes be quite a bit off, but to a degree, it does what it purports to do. 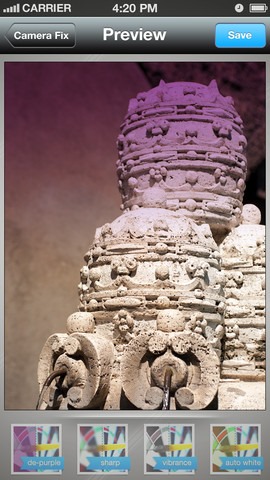 As Apple has pointed out, the issue is – for the most part – fairly unavoidable, and learning to live with it is the best way to get the most out of your device’s camera. Trying not to take shots into or angled towards bright light is a pretty good start, because said light will reflect off your iPhone’s camera modules and cause this dusty layer. Whenever you take a shot, you should use a little trial and error in order to discover the very best positioning, and shielding the lens with your hand  will also help to minimize purple haze. 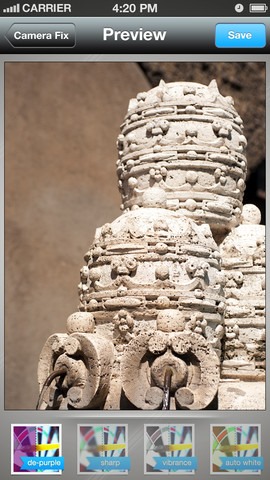 Still, Camera fix does a reasonably decent job, and is available from the App Store via the link provided below.