At the beginning of this month, it was presumed the iPad Mini would be announced on October 17th, with invitations going out a week prior on the 10th. That hasn’t turned out to be the case, but tech enthusiasts remain defiantly undeterred – predicting Apple’s announcement instead for next week. As well as corroborating the notion of a launch next week, AppleInsider has learned the smaller iPad will arrive in four storage configurations ranging from an entry-level 8GB all the way up to 64GB.

The Cupertino-focused blog has obtained what appear to be legitimate iPad Mini SKUs, or stock-keeping units, which show a grand total of 24 different varieties of the scaled-down slate. The variety would render the iPad Mini the most varied iOS device to date, and although the colors are expected to remain black or white, there are still quite a few decisions for consumers to make.

The 8GB Wi-Fi-only model would be the cheapest, and one suspects the most popular, of the roster in general, and although AppleInsider’s findings are by no means set in stone and confirmed, the model numbers P101, P103, P105 and P107 detailed in the SKUs are – according to "one person familiar with the inventory" – strong indicators of four different capacities. As we know, the current iPad 2 / 3 don’t drop below 16GB, but with the presumed purpose of the smaller iPad to fend off the threat of the Nexus 7 / Kindle Fire HD, it’s not surprising to see the base model scrimp on storage.

It has been suggested the 8GB model could ship for as little as $249, and although it’s perhaps to early to make any wild suppositions, an iPad at such a low price might just wind up being the fastest-selling gadget we’ve ever seen. While Android tablets have made significant advancements over the past twelve months, there are still many would-be iPad consumers out there whom simply cannot afford Apple’s fanciful price brackets. 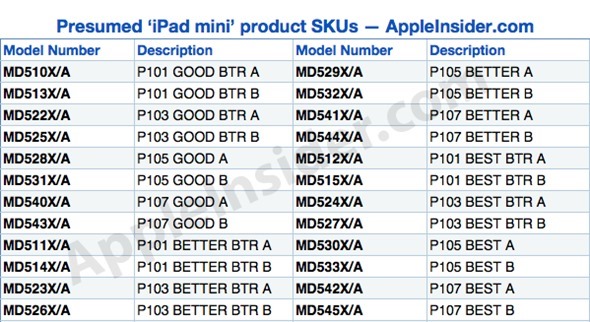 The media event, which is also predicted to be bringing a new 13-inch MacBook Pro with Retina display and refreshed Mac Mini, is expected to be held next week on October 23rd. With today being the 16th, it’s not beyond the realms of possibility that Apple may send invitations out later today, and if that indeed turns out to be the case, we’ll have all the important info here at Redmond Pie, so stay tuned.