Most iPad users, even the most avid of fans, likely see the device as an entertainment and productive tool, not as something that can be worn, and especially not as headgear. This brave woman was spotted walking around the streets of New York City wearing four iPads around her head in order to promote a new iPad-only magazine. 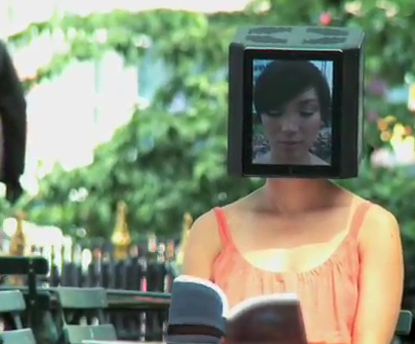 Thinkmodo, the viral company behind this project, has managed to stick 4 iPads together in order to form a cube, each one displaying one video of each side of her head. As you might expect, walking around a large city such as New York with iPad backs covering her eyes isn’t the best idea, therefore the geniuses at Clockwork, who were put in charge of assembling the iPad helmet, have embedded a hidden camera into her purse that feed live video to a pair of glasses she was wearing inside the “iPad head”, making the chances of her being hit by a yellow cab just a little bit slimmer. The project’s Creative Director Michael Krivicka has voiced on the project’s objectives:

The concept and analogy here is to show a guy ‘getting inside a girl’s head’ and sort of ‘reading her mind’ by flipping through the magazine pages on the iPad. The reason for that is: it is the first magazine for men that is written by women, so for the first time women are letting guys in on what they think,

As you can tell from the video above, this whole approach caused awkward reactions among New Yorkers. Only one daring guy had the courage to start touching the girl’s head, or the iPads: once he did, pages of the magazine in question popped up.

This male-oriented magazine is named Cosmo For Guys which, according to its App Store description, offers monthly issues featuring s3xual and emotional advice for men who are looking to please their female partners:

In each new issue, you’ll find straight-up advice and specific, detailed tips and techniques that will help you satisfy her in bed and out.

OK, I think you get the idea. While it certainly won’t take the iPad App Store by fire, this new magazine will join a growing list of iPad-only publications that take advantage of the device’s features such as the built-in accelerometer and the large multi-touch screen.