With the iPhone 5s quickly becoming old news on the Internet, attention is now very much beginning to turn towards what Apple has hidden up its sleeve for both the iPad 5 and iPad mini 2. All the leaks and rumors that were reserved for the iPhone 5s and iPhone 5c just a few weeks ago have now made way for rumors about tablets, though some of it does feel eerily familiar.

Take the fact that the iPad 5, and possibly even the iPad mini are being heavily rumored to feature Apple’s new Touch ID sensor, just like the new high end iPhone 5s does.

A fancy name for fingerprint recognition, Touch ID allows users to unlock their devices and verify their identity in the App Store using the power of their fingerprints, and with new iPads due in the coming weeks, all attention has now turned to the possibility that Touch ID could be on the way to Apple’s tablet lineup.

Perhaps the best reason for the iPad 5 receiving a Touch ID upgrade is a new video that has shown up on YouTube. The video appears to show an iPad 5 front plate devoid of its Home button. As the YouTube videographer points out though, the hole for the button is too small for an iPhone 5, or current iPad Home button to fit in. On a hunch, an iPhone 5s Home button was tested with the new panel, and as if by magic it fits perfectly. With the Touch ID Home button smaller than previous versions, the rumor that the iPad 5 will feature Touch ID just gained a little more credence. 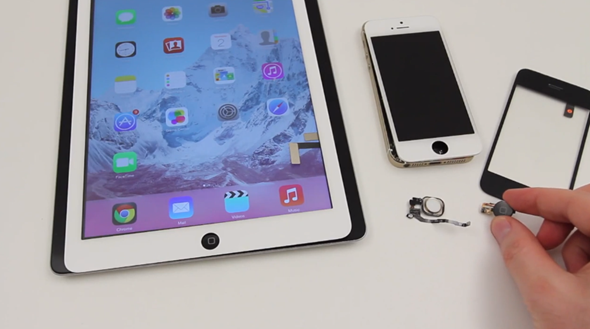 Of course, the iPad 5 is heavily believed to take design cues from the iPad mini which features a smaller Home button than the other iPad range, so it’s entirely possible that this is the reason for the smaller hole, and that Touch ID isn’t actually going to make an appearance on the iPad after all.

With Apple expected to announce new tablets before the month end, hopefully we won’t have too much longer to wait before we find out just what we’ll be buying in a few weeks.