If you are the proud owner of an iPhone 7 or iPhone 7 Plus, and have dastardly plans to test it beyond Apple’s IP67 rating, then you may be in for a positive surprise.

Like with most new device launches that claim to be able to resist water and dust, it wasn’t going to be long till we start seeing an influx of videos which show the iPhone 7/7 Plus being dunked, splashed, or in this one particular instance, taken to the limits of its water resistance function. We see just how well the new iPhone holds itself in extreme circumstances, but be prepared to be surprised. 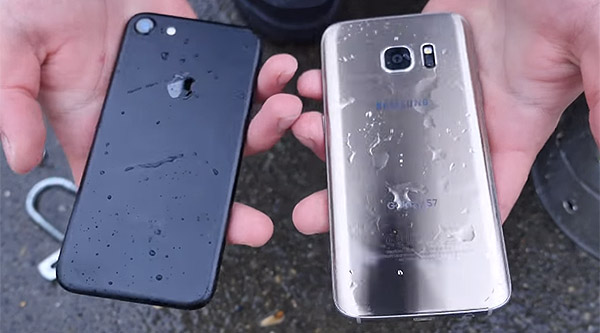 Officially speaking, Apple’s new iPhone 7 models ship with a guaranteed IP67 rating. That ingress protection rating means that Apple’s new smartphone range should be able to withstand being dunked into 1 meter (3.3 feet) of water for a period of up to 30-minutes. That rating also means that the device is generally classed as being water resistant, rather than waterproof. For comparison, Samsung’s Galaxy S7 smartphone offers IP68 rating, meaning that it can survive 30-minutes in 1.5 meters (5 feet) of water without suffering damage or performance degradation. But what happens when you try to test the devices beyond the advertised limits?

Rather than being happy to prove that the IP67/68 rating is accurate on both devices, the video-makers expectedly wanted to push the boundaries and really see what the breaking point of the iPhone 7 and Galaxy S7 is from a water submerging perspective. In order to test that, YouTuber in the video took the opportunity to take both devices down to depths of 5, 10, 15, 20, and 30 feet in a Washington State river for periods of five minutes at a time. Both devices survived those tests, forcing him to go one step further and submerge both pieces of hardware in depths of 35 feet for five minutes.

That was enough to kill off Samsung’s Galaxy S7 with the device turning off and then displaying some random and bizarre behavior. Surprisingly, Apple’s iPhone 7 wasn’t phased by the depths, leaving us to believe that Apple may advertise IP67 water resistance, but with the device actually bringing a much more capable experience. Aside from a small amount of visible water damage at the bottom of the display, the iPhone 7 was performing and working perfectly after being brought back up from 35 feet.

Of course, if you have an iPhone 7, we would recommend that you be safe in the knowledge that if you are ever forced to these types of depths with your device then you should still have a functioning device, rather than replicating and testing the waterproofing out for yourself.

And here’s another video from same YouTuber testing water resistance of iPhone 7 and Galaxy S7 side-by-side 1.5 meters underwater for up to 30 minutes.