Here’s a specs comparison of the iPhone 7 Plus vs Galaxy Note 7 vs Galaxy S7 Edge. With the iPhone 7 Plus having now been announced by Apple, there’s undoubtedly going to be a lot of confused consumers who simply don’t know whether to stick with what they know and go with Apple’s new device, or whether the best move would be to try something a little different and opt for one of Samsung’s 2016 flagship devices.

Size-wise, all three devices are comparable, and all offer similar display sizes, with the Note 7 offering 5.7-inches over the 5.5-inches of the iPhone 7 Plus and S7 Edge, but how do the rest of the specifications stack up against one another? 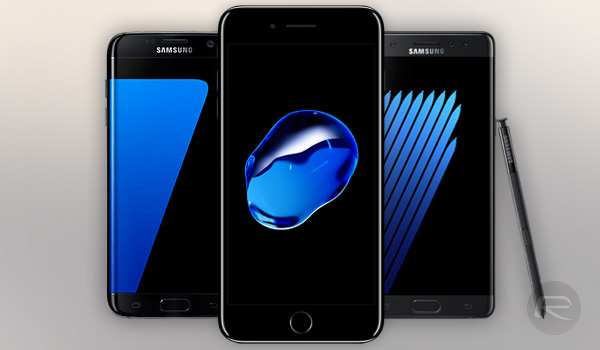 Let’s start with the similarities. All of the devices are also built on top of 64-bit architecture, offer multiple color options with some crossovers in choice between all three, have 12-megapixel rear shooters, and are built from aluminium as a base, though there are a couple different finishes on offer for the iPhone 7 Plus this time around.

From a mobile photography perspective, the best experience and outputs would have normally come from one of the Samsung devices, but are now likely to come from Apple’s new iPhone 7 Plus thanks to a new 7MP front-facing camera and the new dual-lens camera system on the rear that packs x2 12MP wide-angle and telephoto lenses with optical zoom and depth of field effect capabilities. The latter isn’t present on the 4.7-inch iPhone 7, but definitely a defining offering of its larger variant. The frustrating thing for prospective iPhone 7 Plus owners is that its Retina HD display may be 25% brighter and have a wide color gamut, but it packs the same 1920-by-1080 pixel resolution. When you take into account the 2560-by-1440 Quad HD experience offered on both the S7 Edge and Note 7, you start to consider the Samsung hardware for visual clarity. Though iPhone’s display has pressure sensitive technology, something which Samsung devices are still missing.

All devices support contactless payments in the form of Apple Pay and Android Pay, but that alone could sway you if you already use something like Apple Pay with an existing iPhone model or Apple Watch. When you actually look at the specifications side-by-side, as you can below, it becomes very difficult to choose, with the decision, as is usually the case, generally coming down to one thing – are you iOS or Android? Check out the chart for yourself and see what you think.

iPhone 7 Plus Vs Galaxy S7 Edge Vs Galaxy Note 7:

Note: Samsung has pulled Galaxy Note 7 off retail shelves after it went on sale in August following a recall of all devices worldwide due to battery explosion issue. While the new fixed version of Note 7 has started arriving now in some regions, it’s officially still not on sale again until late October in US, and late November in Europe.

Update x1: Geekbench benchmarks result shows Apple’s iPhone 7 and iPhone 7 Plus are currently the fastest phones on the planet. You can find the results here.

Update x4: And here are drop tests between iPhone 7/7 Plus, Galaxy Note 7 and Galaxy S7 Edge: