iOS Smokes Android When It Comes To HTML5 Gaming, Delivers Up To 3 Times More Performance

When it comes to mobile operating systems, most of the talk is centered around iOS and Android, with Apple and Google’s OSes generally considered to be the two most advanced offerings out there. That isn’t to say that the competition doesn’t have something to bring to the table, with the likes of Windows Phone gaining a small amount of traction in the marketplace and definitely looking likely to feature heavily in the future. 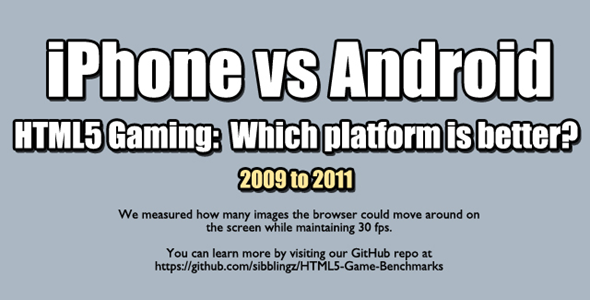 With the growing popularity of HTML5, a lot of people are making murmurings of it being a threat to Apple’s crown in the long-term future, but it would seem that at the present moment, Apple produced devices do the best job of rendering HTML5-based content. A recent study by Spaceport.io into the web standard has shown that the iPhone and iPad regularly perform up to three times better than smartphones and tablets which are powered by Google’s Android operating system.

The comparison was run against a variety of tried and tested benchmarks, with iOS devices performing notably better, and the performance of hardware powered by Android being sporadic at best. The one Android smartphone which did stand out, although was still trailing behind the iPhone and iPad, was the Galaxy Nexus.

A lot of people don’t seem to know a great deal about the power that is HTML5, ignorant to the fact that it actually refers to a collection of different web technologies and provides how developers will one day write applications using HTML5 and have them run perfectly across a number of mobile operating systems. If this was to be the case, it would certainly go somewhere, bridging the gap between the likes of iOS and Windows Phone which is currently getting larger. The test which were carried out shows that devices running newer versions of the Android and iOS software performed a lot better, showing that Apple and Google are both releasing updates which vastly improve HTML5 rendering.

The adoption of HTML5 by large companies, such as Facebook and Mozilla could give the technologies the traction it needs for mass take up. Mozilla have already announced their intentions to create an HTML5 application marketplace with Facebook also jumping onto the HTML5 bandwagon by calling for cooperation from the industry as a whole on HTML performance standards.