Apple recently released iOS 9.3.3 beta 1, bringing with it bug fixes rather than new features, etc. When a maintenance release such as this arrives, even in beta form, there are some somewhat obvious questions that need to be asked around its viability, whether that be for day in, day out use on an older iPhone or whether any more bugs were introduced during its production. As anyone who had an iPad Pro refuse to update following the most recent bout of iOS updates will attest, a buggy update is no fun at all.

With such important questions to be answered for each new iOS release, beta or not, it’s easy to forget the most important question of them all – just how fast is the new, unreleased version of iOS? More specifically, how fast is it when compared to the same software on older iPhones rather than the new iPhone 6s line of phones? We’ve all had old hardware fall into a pit of performance despair upon a new software release, and it’s no fun for anybody, which brings us to this speed test. 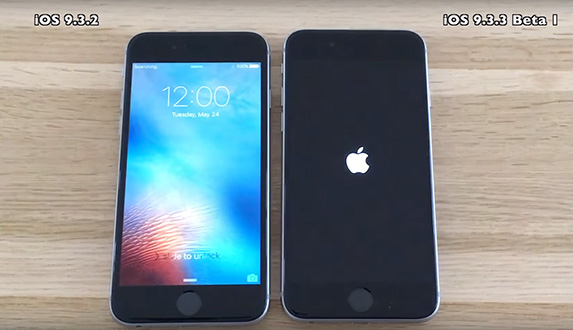 A host of new videos have been posted online comparing the latest beta release of iOS with the most recent, publicly shipping version on a range of hardware to ensure everyone knows what to expect come the day the beta becomes a public release. Will that older iPhone keel over and die?

Well, the answer is no, not really. While performance is very similar across the board, there are some instances where the current beta release of iOS 9.3.3 is a tad slower than iOS 9.3.2. That’s perhaps to be expected given the additional logging that is often activated in iOS betas, so no real cause for alarm here. If you’re at all worried, firstly, it might be a good idea to avoid the betas altogether, and secondly, be sure to check out the speed test videos in their entirety.