Apple has just made iOS 9.1 beta 5 download available to members of its both Apple Developer Program and Apple Public Beta program. The unveiling represents the fifth release of Apple’s continued development of the first major update of iOS 9.1, bringing with it a number of improvements that Apple will be hoping will meet the requirements of those testing it out.

Beta 5 release of iOS 9.1 comes less than a week after beta 4 was seeded to developers, giving those interacting with the firm something to continually get their teeth into. As per the included change log that is released with the new seed, iOS 9.1 beta 5 contains a number of improvements and bug fixes that should hopefully see the firmware stabilized and on the road to an official public unveiling for mass consumption. At the time of writing it’s currently unclear if Apple has integrated any major changes or feature additions into this latest beta, but we’ll keep you posted if we find anything. 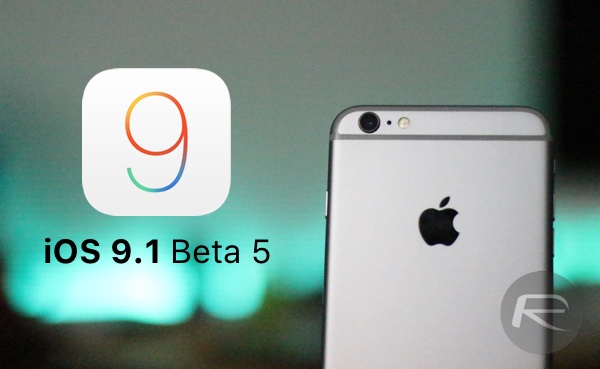 As previously mentioned, iOS 9.1 represents Apple’s first attempt at a major update to the latest iOS 9 firmware that powers its iPhones, iPads, and iPod touch devices. When it’s finally released to the public, users can expect to receive a whole set of stunning new emoji icons as well as an array of new wallpapers that can be used on the lock screen and home screen. There’s also some additions that will see support added for developers who want to integrate Live Photos functionality into their apps.

One of the interesting things about iOS 9.1 is that it also brings support for new Apple hardware that is set to launch next month; the iPad Pro and the accompanying Apple Pencil. The release of iOS 9.1 beta 5 just a week after the fourth seed shows just how enthusiastic Apple is about getting iOS 9.1 into the hands of as many users across the globe as possible. The fast-paced release schedule suggests that we will see a public release of the firmware sooner rather than later.

Anyone who currently has the fourth beta of iOS 9.1 installed on one of their devices can access this latest seed via an over-the-air update through Apple’s on-device Software Update mechanism (Settings >> General >> Software Update).

The download itself should weigh in at approximately 1.4GB for those installing for the first time from the Apple developer portal.

Sound off in the comments if you find anything of note that’s been introduced with this build.