Apple’s iOS 8 keynote at WWDC last Monday told only a portion of the story regarding the upcoming software, and as we’ve been learning ever since that showcasing and subsequent roll-out of the first beta, Apple has packed a lot of less obvious features into the mix. Split-screen multitasking for iPad was one of a number of pre-WWDC rumors that, we thought, had failed to materialize, but hidden deep inside the iOS 8 code is evidence that, in fact, such a feature could well be on its way.

We knew well in advance of the Worldwide Developers Conference that Apple wouldn’t necessarily divulge all of iOS 8’s treasures at the keynote, and given how some of the products – from the iPhone 6 to the iWatch – have yet to be revealed, it was always going to be the case that features related to such devices would be kept under wraps. But as we’ve already seen, references to unannounced gadgets and features are aplenty, and with the new version of Xcode having already alluded to the idea of a larger iPad, these multi-screen capabilities tie in nicely with that particular notion. 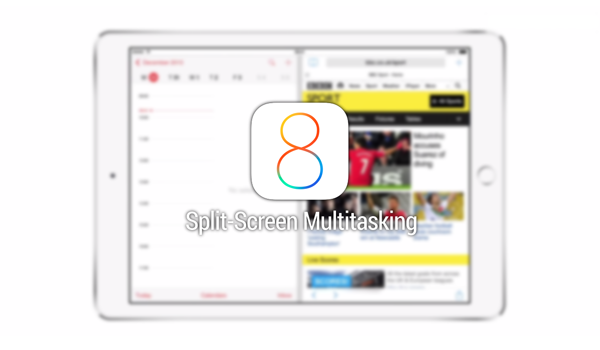 Developer and all-round Apple guy Steven Troughton-Smith has spotted within iOS 8’s code a feature that allows SpringBoard to run two apps alongside each other, and as well as splitting display space 50-50, one app can also command three-quarters to another app’s quarter.

This feature, from what we’ve heard previously, will only roll out to the iPad Air (and other full-size iPads on iOS 8) and not the iPad mini or iPad mini with Retina display, due to the comparative lack of display real estate. Given Troughton-Smith’s findings, it seems very likely that the feature will be deemed ready for public consumption by the time iOS 8 releases around September time, and as we proceed through the beta release cycle, we may begin to see it take shape.

On the topic of the so-called "iPad Pro", it has been mentioned on several occasions that a larger-displaying tablet will arrive out of Cupertino later on this year, as a part of a manic Q3 that will see an abundance of new hardware unveiled by Apple. The company’s own Eddy Cue has been very enthusiastic about what’s in store, stating that what’s next comprises the best product pipeline he’s seen at Apple in 25 years, so we’ll have to wait and see just what’s on the table come this fall.