If you’re a keen jailbreaker, you’ll no doubt have caught the coverage of recently released Pangu8 tool, and while the wider jailbreak scene appears to be focusing on bug-fixing for the time being, everything does seem to be shaping up rather nicely. With Cydia now installable and Saurik having also made some updates to Cydia Substrate for iOS 8, things are looking a lot more familiar to jailbreaking fans, and with many tweaks already up and running for jailbroken iOS 8 devices, you needn’t wait to reap the benefits of f.lux, Zeppelin et al. For the sake of clarification, though, here’s a list of tested tweaks, with a note of whether they’re working, partially functional, or completely incompatible for now.

As is often the case when a new jailbreak is launched, particularly for a major new firmware like iOS 8, many of the pre-existing tweaks serving those on iOS 7 and earlier are not playing nicely. With many jailbreak developers already getting to work on the fixes, it won’t be long before some of our all-time favorites are whipped into shape for iOS 8, but even though the list of working tweaks is presently rather short, there are still a couple of gems in there. 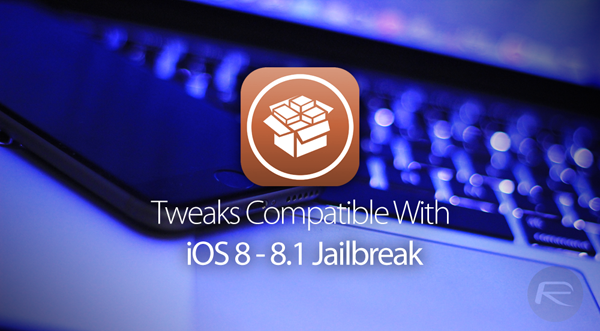 The aforementioned f.lux is perhaps the pick of the functional tweaks, adding a natural, relaxing, system-wide dimming feature which can be adjusted to suit your specific tastes. With subtle hues, it can also be set to change with the daylight, and if you haven’t used it, it’s one you absolutely must check out.

Zeppelin is another awesome tweak, allowing you to change your carrier logo to just about anything you want. There are plenty of pre-made options in Cydia, from Adidas to McDonald’s.

WinterBoard partially works, but does not apply themes, which is a bit of a pain since theming is kind of the point. Still, with jailbreaking largely attributable to Saurik in the first place, we’ve every faith that his iOS skinning app will soon be firing on all cylinders.

The full list, as of right now, can be found below:

The whole chart, which is being updated periodically can be accessed here.

As a side note, is anyone else looking forward to being able to put more icons on the home screens of these new, larger iPhones?