If you’ve been following the news for the last few hours, you’re probably aware that the latest build of iOS 5, known as "Beta 4", was seeded to developers. This is also the first ever version of iOS that can be downloaded over-the-air to iOS 5 Beta 3 devices, removing the need for iTunes to apply this update altogether. It now turns out that if you’ve jailbroken iOS 5, you won’t be able to update over the air. 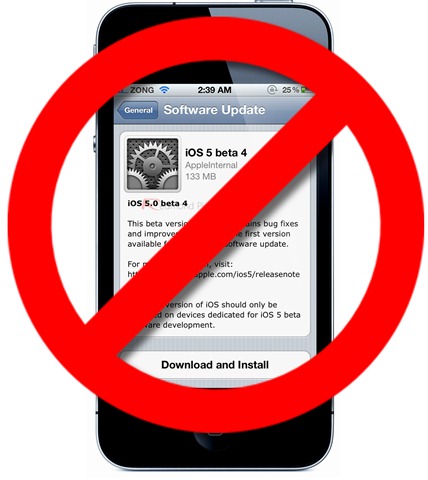 The news was confirmed by MuscleNerd, a well-known member of the iOS jailbreaking community. According to him, the updater performs a check on the /Applications folder and locate a jailbreak. If any is found, the updating process will fail.

The 5.0b4 OTA update won’t work on JB devices due to an explicit check of /Applications..almost like a present from Apple

It’s no surprise that Apple is trying to cripple the experience of jailbroken devices as much as it can, and banning certain online services can be an effective way to do it. Yet, a future jailbreak or modification could presumably modify Apple’s update feature and trick it into installing the update anyway. A few months ago, some suggested the opposite: Apple could have instead just force an updated firmware on all users and break the jailbreak immediately, although the many shortfalls of this plan were quickly pointed out.

How can you update to iOS 5 (on jailbroken device) now? The short answer is just like you did before: through iTunes. Offline updating is in no way affected by this change and will keep working like it always has: just plug your device into the computer, download iOS 5 Beta 4 from Apple’s developer site and perform the update like you have always done. This will reverse your jailbreak, of course, but it’s the only way you’ll be able to update, which you should, anyway.

Last week, Apple released iOS 4.3.4 to patch PDF vulnerability in Mobile Safari that allowed JailbreakMe to untether jailbreak all devices, including iPad 2 on iOS 4.3.3. Since then, only tethered jailbreak solution is available for devices on iOS 4.3.4, and that too doesn’t work on iPad 2.

For those of you who don’t know, iOS 5 is the newest version of Apple’s mobile operating system that was introduced at the company’s annual developer conference, known as WWDC. The final version of iOS 5 is expected to be released this fall.