iOS 5 is known for its system-wide Twitter integration, but according to a developer who’s tested the Beta 1 out, the new iOS also integrates with other social networks, such as Facebook, Flickr, LinkedIn and yes, even MySpace.

While integration with other services is generally functional, it doesn’t come without a few problems: for example, MySpace doesn’t display all social fields in some instances. That’s to expect from a pre-release system though, still in a relatively early testing stage. It’s still unclear why Apple hasn’t mentioned that iOS 5 would communicate with services other than Twitter, but my theory would be that they were still too buggy to show off on Monday, therefore the company decided to leave them out of the announcement completely.

Integration isn’t buried deep within iOS 5’s source code: in fact it’s well visible in the System Preferences and can be turned on just as easily as Twitter integration. We don’t yet know whether Apple has given up on the other services and won’t include support for them in future pre-release editions or, more likely, whether they’ll fix the remaining bugs and ship a fully social iOS 5 in just a few months. There’s also the ability to add a "Custom Service", presumably for more obscure services that aren’t listed, but it’s still unclear how functional that last option will be. 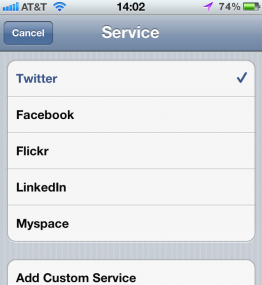 Twitter integration has already turned some heads due to its simplicity. After a one-time login, iOS will pull the contacts from the service and display them in Address Book, allow users to tweet out photos, maps, website URLs and videos from their respective Apps and, of course, view their timeline.

Ever since iOS 5 was announced on Monday, developers and Apple enthusiasts alike have been poking around with the operating system. Just recently, we’ve discovered interesting tidbits that were left unmentioned: FaceTime, for example, now works over 3G. Earlier today, a tethered jailbreak for iOS 5 was finally released, after being teased just one day after the mobile OS was unveiled. Some have also found references to future iPad models on the developer release.

iOS 5 is the most significant major release of iOS in recent memory, with new features such as Notifications Center, a brand-new notifications system; iMessage, a new instant messaging client available exclusively for iOS users (watch our very own showcase here); Newsstand, a system that lets users read and manage publications, such as magazines, from one place; as well built-in setup wizards, ending the need for a computer at all to set up iOS.