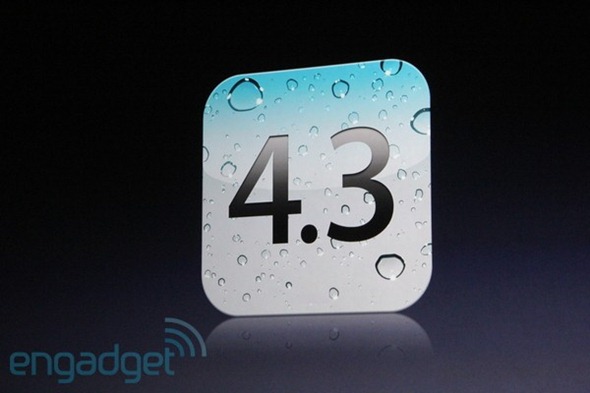 This version of iOS brings a number of new features for iPhone, iPad and iPod touch users including: ability to to cancel the download of an app, multitouch gestures for iPad (for developers only), Personal Hotspot for GSM iPhone 4, AirPlay for third party apps, option of choosing between mute switch and rotation lock for iPad’s “Side Switch” hardware button, subscription-based payments to iTunes App Store, Nitro JavaScript engine from Safari on OS X, new iTunes Home Sharing features, support for FaceTime on iPad 2, Photo Booth for iPad 2 and other system wide changes and improvements.

First Beta of iOS 4.3 was released back on January 12th, followed by second Beta on January 19th and third Beta on February 1st.

Apple will release this very final version of iOS 4.3 on March 11, along with the iPad 2.