The first beta release of iOS 11.1 has now arrived, just 24 hours or so after iOS 11.0.1 was released to the public. This new beta is the first look we  have gotten of the software that will eventually power the iPhone X when it goes on sale in November, but for those with other iPhones, it is as yet unclear just what this new release will bring to the table.

One thing that we can pretty safely say is that it will not offer a big speed improvement over previous versions. 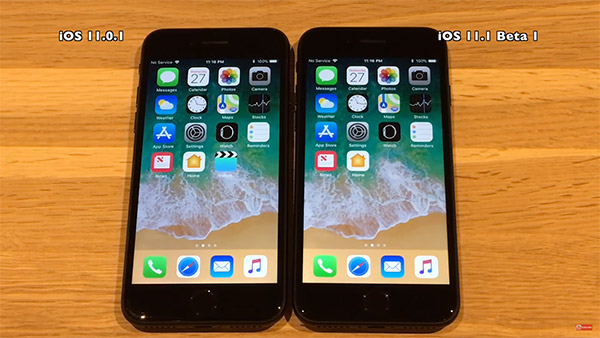 We can say that because YouTuber iAppleBytes has done some testing to see just how well iOS 11.1 beta 1 fares when put up against iOS 11.0.1 in terms of performance and speed. The testing was carried out using an iPhone 5s, iPhone 6, iPhone 6s, and an iPhone 7 in order to get a full picture of how the release does when installed on older and newer devices. We did not expect fireworks when settling down to watch the videos and, as expected, there is not a great deal in it when it comes to performance.

That, of course, is just fine because iOS 11.1 is not here to break any speed records. The release’s main job is to give the iPhone X all of the software it needs to allow its bells and whistles to function. We also expect Apple Pay Cash to arrive as part of the final version of iOS 11.1, so there is plenty to look forward to even if you already own an iPhone and do not plan on upgrading to the $999 iPhone X any time soon. Timescales for iOS 11.1 arriving are unclear at this moment, but with the initial beta now with us, we think it is likely to arrive in full just before the iPhone X goes on sale on November 3rd.

Be sure to check out the videos yourself to get the full picture of how iOS 11.1 beta 1 performance compares with iOS 11.0.1 when it comes to out and out speed.

If you think iOS 11.1 doesn’t fix all the performance lag issues of initial versions of iOS 11.0.x, you can follow our tips guide here to try and fix the problem: Speed Up Or Fix iOS 11 Lag On iPhone, iPad, iPod touch [Tips].