iOS 10.3 Release Notes / Changelog [All New Changes In One Place]

Here’s official iOS 10.3 release notes / changelog, as released by Apple. In short, here are all new changes in iOS 10.3 in one place.

With iOS 10.3 now officially available for public consumption, Apple has also released the full, official changelog to accompany the release, showing the in-depth granular information necessary to outline exactly what has changed with this latest release. Like the update to iOS itself, the changelog is available right now for everyone to see, and, as you would expect, we have it right here for you. 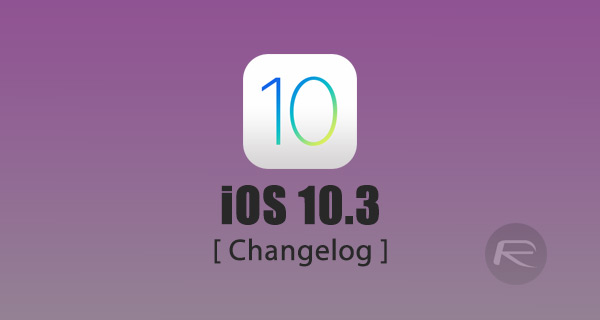 With iOS 10.3 going through a fairly long beta process, iPhone and iPad owners are just glad that the update is now officially propagating through Apple’s servers and making its way to devices around the world for download and consumption.

It’s probably fair to suggest that not many people would have expected 10.3 to to go into a pre-release state so soon after the release of iOS 10.2.1, with even fewer expecting Apple to actually bring some real tangible and outward-facing changes to the platform with this versions, especially considering we will be getting an initial reveal of iOS 11 in the coming months at WWDC 2017.

However, iOS 10.3 is here, it is available to download right now, and it does have a number of notable improvements for iPhone, iPad, and iPod touch owners to sink their teeth into. Perhaps most notably, especially for those who have invested in Apple’s new personal music technology, iOS 10.3 includes an improvement to the Find My iPhone experience in order to locate lost AirPods with relative ease. A fantastic little feature for those who have opted to part with upwards of $150 for Apple’s new accessory.

There’s also the integration of a brand new internal file system that powers iOS, dubbed Apple File System, or APFS for short. Not necessarily relevant to device owners on a day-to-day basis, but definitely a large undertaking on Apple’s part.

Many companies, including Apple, are starting to look more seriously at the improvements in artificial intelligence in order to drive products forward and stand out from the competition. Apple is expected to make advancements in this area going forward, but for now, with iOS 10.3, there’s noticeable improvements to the Siri digital assistant, including improvements to SiriKit, the framework which third-party developers use to access Siri, to enable richer, deeper Siri experiences within App Store apps.

If you are about to embark on the iOS 10.3 journey, make sure to check out the full and final changelog, as published by Apple, here below: