Here you will find iOS 10 / 10.0.1 download links (IPSW files) for final version of the firmware that Apple has now released for iPhone, iPad and iPod touch devices.

iOS device owners have more than likely heard about iOS 10, and have probably visited and read about Apple’s revamped mobile platform via the company’s dedicated page, but for many device owners out there, this final release by Apple represents the first opportunity that most have had to actually interact with the platform personally. 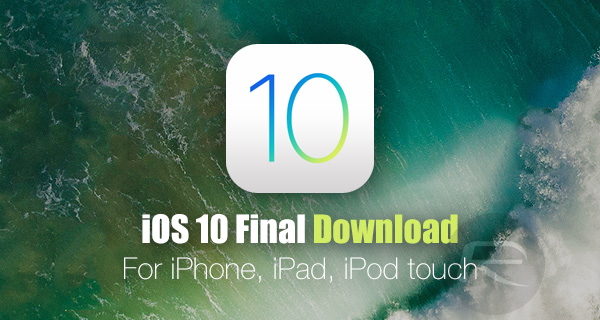 Apple is clearly proud of what has been achieved with iOS 10, and not only has the company been waxing lyrical about the revamped platform, but has also described the firmware as containing some of the largest changes made to the platform in its history. The jump from iOS 9 to iOS 10 may look minimal from a design and aesthetic perspective, but when you actually start considering the features and changes, it immediately becomes clears that the engineers at Apple have done an impressive job.

Compatible iPhone, iPad, and iPod touch owners can expect to receive an updated platform that instantly introduces impressive changes to native app experiences like Music, Maps and Messages. Communication lovers can now interact with scribble pads within Messages, as well as send iMessages that benefit from new message types, such as invisible wordings with Invisible Ink, and animated communication.

Apple has also introduced a dramatically improved Siri experience that instantly brings additional power and capability to the voice-commanded feature, as well as the launch of SiriKit that allows developers to integrate Siri into third-party app experiences. As expected, the company has made a song and dance about it, and if you wish to know more about the feature, check out our post here.

Of course there are many other features in this release. You can read all about the changes and features brought forward with iOS 10 here.

For some, downloading and installing iOS 10 isn’t just a case of whether or not you have a iOS 10 compatible device. There are other considerations to be taken into account, such as whether or not you value a jailbreak. Currently, there’s no publicly available jailbreak for any firmware beyond iOS 9.3.3, which means upgrading to iOS 10 will instantly remove any jailbreaking ability until a new, functioning jailbreak is announced. You can keep up with the jailbreak status of iOS 10 here: Jailbreak iOS 10 / 10.0.1 For iPhone, iPad, iPod touch [Latest Status Update].

Below, you will find direct download links of iOS 10/10.0.1 IPSW files that you can use to update, or clean install using iTunes.