IntelliScreenX For iOS 7.1.x Beta Released, Here’s How You Can Download It

Intelliborn has just rolled out an update to IntelliScreenX, the iconic jailbreak tweak that pulls a wealth of information and functionality into one intuitive interface, has just been bumped to version 7.10.3, and notably, includes support for the latest versions of iOS 7 jailbroken by the Chinese outfit Pangu.

We were pleasantly surprised by the impromptu arrival of Pangu, which finally brought an untethered jailbreak to iOS 7.1, 7.1.1 and subsequently, 7.1.2, and barring a few early issues relating to the installation of a dodgy pirate apps store, everything seems now to be running smoothly. However, compatibility has been a major issue, since devs – like the rest of us – didn’t foresee having to fine tune apps for compatibility with anything later than iOS 7.0.x, and for the most part, the jailbreak scene was collectively looking ahead to iOS 8. 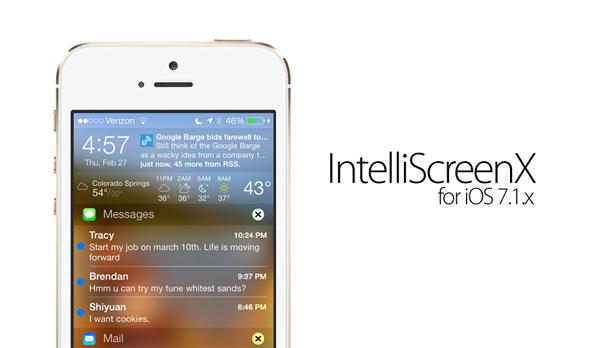 The Intelliborn team is one of the foremost of the scene, and IntelliscreenX – its main outlet – is the cornerstone of many a jailbreaker’s staple diet. Indeed, this is one of those tweaks that once you’ve accustomed yourself to it, you’ll struggle greatly to manage without it under your wing, and thus, it’s good to see this update so soon after Pangu made its glorious arrival last week.

It’s going to be a while before many of Cydia’s other great tweaks have been adjusted to suit the more recent Apple software, but if you’ve only been waiting on IntelliScreen X, you can pick it up right now from the Intelliborn beta repository.

To do this, fire up Cydia from your home screen, hit the Sources tab, then Edit > Add and type intelliborn.com/betaisx into the URL box. Thereafter, you’ll be able to return to Cydia and download IntelliScreenX, and once the process is complete, be sure to give your device the customary respring.

Download it, take it for a spin on your jailbroken iOS device, and leave your thoughts in the comments section below.