When Apple launched Game Center in iOS 4, one of the many arguments laid fairly and squarely at its feet was its severe lack of any sort of messaging system. When you look at similar services on other platforms such as PSN, Xbox Live or Steam then you’ll see that sending messages between players is integral to the experience. Apple missed that, completely.

We at Redmond Pie have been raving about the subject for some time now, and at least one of the team was quietly hopeful that Apple would see the error of their ways and add such functionality to Game Center in iOS 5. They didn’t, and we’re still waiting.

One independent developer has taken matters into their own hands, though we’re not entirely sure that this is what we had in mind! 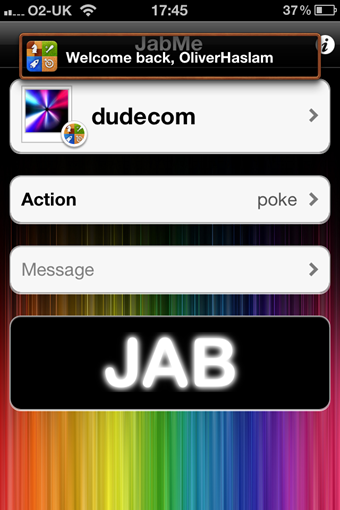 Coming from XVision, JabMe is an interesting take on the problem of filling the gap for instant messaging left by Apple’s reluctance to fill it themselves. While it does offer a way to send messages to and between Facebook and Game Center friends, it still has a definite game angle to it.

Jabbing a friend can also be accompanied by a sound and ‘stab action’ which will be tracked in a leaderboard. The more you jab people, the more likely you are to reach the summit of said leaderboard. It’s an interesting take on the old messaging formula, and if you’re into that kind of social gaming then we’re sure you’ll like this, too.

Start a Jab War! Get the highest number of jabs and put your name on the leaderboard. Climb up the rank and earn your Warmonger achievement badge. Play against your friends and the world.

As is the case with all the other iOS SMS replacements, JabMe uses push notifications to send and receive messages, meaning that you can jab to your heart’s content without having to ever worry about the cost. You don’t want money to get in the way of topping that leaderboard now, do you? 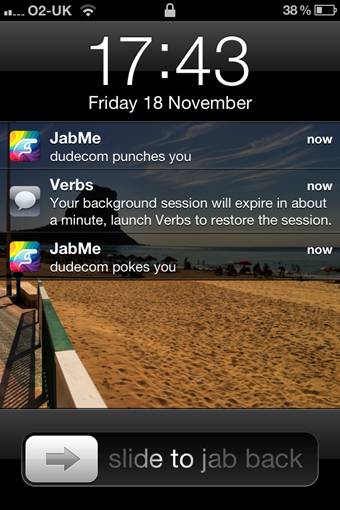 JabMe is free to download from the App Store right now, with additional actions unlockable via $0.99 in-app purchases. 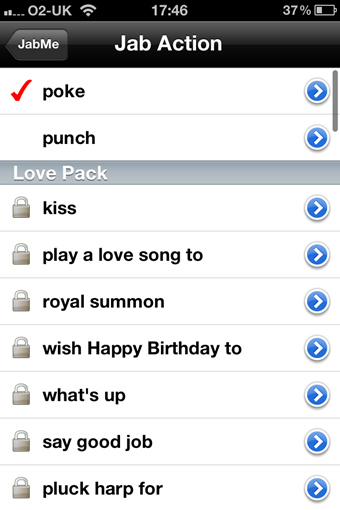