Imgur MemeGen App For iPhone Lets You Create Memes Like A Pro!

Love them or loathe them, you cannot escape Internet memes. They’re everywhere, and this is sue in no small part to sites like Imgur. The image hosting service has sought to turn itself from a simple storage hub to the YouTube of viral images, and has, to some degree, succeeded thus far. The Imgur iOS app has been around for a while now, allowing mobile users to continue browsing, posting, rating and commenting on their favorite images and memes, and now, the meme generation facility has just arrived for iOS. Download link and more details can be found right here.

The app, which is called Imgur MemeGen, lets you create your memes right from your iPhone, iPad or iPod touch and post them straight to Imgur. Not only does the app make it incredibly easy for you to cook up your own memes, but you can also remix those made by others, and so if you feel as though you’ve a bit too much free time on your hands, this is one download you won’t want to pass up on. 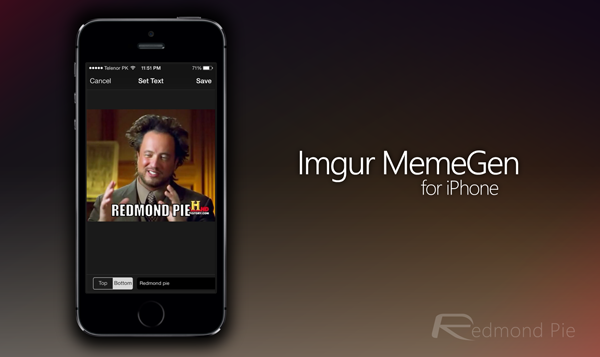 While, as aforementioned, the Imgur app has been around for a while, it’s not as popular as third party offerings that beat it to the draw. With MemeGen now in circulation, hopefully the company will begin to see an up-take of users seeking the official apps rather than simply grabbing the alternatives out there.

As you would imagine, the app itself its absolutely free of charge, and having given it a try-out on an iPhone 5s, we can confirm that it works as advertised. In fact, it’s a fairly seamless experience – particularly given that this is a first attempt – and with further updates and features certain to be added in future, it could well prove to be a significant component in Imgur’s quest for eventual world domination. 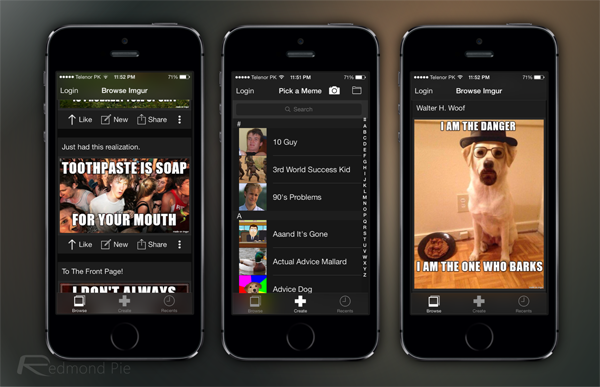 You can download the app via the direct link provided below, so grab it, get meme-ing, and be sure to leave your thoughts on MemeGen via the usual mediums below.

(Download: Imgur MemeGen for iPhone on the App Store)