Humor: What Siri Powered Apple HDTV Could Look Like [VIDEO]

During the course of the last year, there has been much speculation circulating Apple’s future plans to delve into the fiercely competitive connected TV market, implementing features of its current products to create a purportedly new experience, unofficially dubbed "iTV".

Steve Jobs once claimed to have "cracked" three key expansion areas for the fruit company, which comprised of Textbooks (already in motion thanks to iTunes U), Photography (getting there), and standalone television sets. Besides the introduction of 3DTV, the television market hasn’t really altered over the past 10 years, although devices have got thinner, lighter, cheaper, and improved in clarity and resolution. This left tech fans with a few burning questions about Jobs’ quotation, specifically, what is it about the Apple approach to connected TV that would re-define the market? What changes had Steve Jobs and friends made to the traditional viewing experience in order to prompt the ‘Eureka’ moment?

With the introduction of Siri in October – Apple’s system-wide voice recognition software, the penny seemed to drop among analysts and consumers alike. The very much lauded software, said to have been created by Nuance, allowed basic phone tasks to be carried out using speech only, and from that point in time to the present day, the general consensus seems to be that Apple will intertwine Siri (or a similar version of Siri) into any future connected TV efforts. 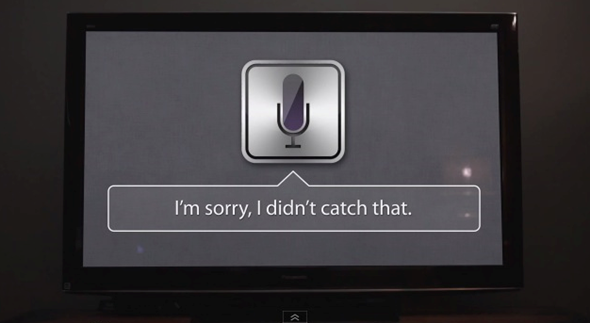 The prospect is certainly an exciting one – particularly for those of use regularly parked atop the couch, glued to the Box. Siri is still only in beta stage, so is naturally a little rough around the edges, but it can still handle setting reminders with relative aplomb. Transferring that idea over to an Apple-branded HDTV, it would be quite easy to ask it to record a series, remind whenever a certain film, actor, tv show, or sporting event can be viewed, meaning you’ll likely never miss a thing, ever.

Indeed, the possibilities appear endless, but bearing in mind that Siri is still like an untrained puppy in the grand spectrum of iOS features, YouTube filmmakers Tripp and Tyler have made a very entertaining video demonstrating how Siri would likely perform based on her first few months of socialization with the end user:

Dubbed SuriTV, it does well to highlight the issues which have plagued those encountering Siri thus far. Although the video does induce a few laughs, we sincerely hope that if and when "iTV" does bear fruit, any voice-activation has been carefully polished!