Every now and then, an event comes along which stands out from the rest and makes its name due to the fact that it is either the first of its kind, or, does something which has already been done but in an entirely different way. Toward the back end of 2011, we were proud to be involved as media partners for the MyGreatFest event, which took part in the heart of London, featuring some of the most prominent names that are associated with the jailbreak community on one way or the other.

As many of you may know, Redmond Pie are once again the official media partners of the event, which has undergone a re-brand and now answers to the name of JailbreakCon, or WWJC if you prefer. Since the end of September, when the MyGreatFest event was over, the team behind the event have been considering moving the event across the pond to the United States to allow the passionate American iCommunity to benefit from meeting some of their iOS-based heroes. The time has flown by, and with the end of Q1 2012 approaching, the JailbreakCon location, date and venue has finally been announced.

September 29th 2012, will see the Redmond Pie sponsored jailbreak event descend onto the South San Francisco Conference Center which is centrally located at the heart of the Bay Area biotech region. The spacious venue is only minutes away from the San Francisco airport, making it an almost perfect location for those who are residents of the area, but also anyone looking to fly in to attend. The chosen venue, which has been picked for its state of the art offerings is also only minutes away from downtown San Francisco and has a large array of hotels, motels, restaurants and amenities perfectly located in close proximity. 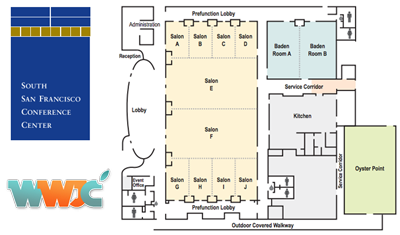 The JailbreakCon website has also been updated to feature some limited edition, official WWJC branded merchandise and a dedicated page which includes a list of the confirmed developers, graphic designers and security researchers who are attending the event to either give on-stage presentations or provide a hands-on workshop. The confirmed guests will return some names which are familiar to jailbreak fans and include the Cydia creator Jay Freeman, the developer of Activator and Display Recorder Ryan Petrich, Chronic Dev Team members P0sixninja and iOPK as well as Apple TV jailbreak legend NitoTV, and popular theming artist Austin Bradley – plus many more. The confirmed speakers can be found on the website but is set to grow and subject to possible change going forward.

Further announcements will be made in due course, relating to when admission tickets will be available, but in the mean time, head on over to the JailbreakCon site and see what changes have been made.