Humor: Senior Citizen Uses An iPad As A Chopping Board For Vegetables, Leaves Us All In Shock-And-Awe [VIDEO]

There’s no doubt that an iPad is a useful – even invaluable tool for those with a vested culinary interest. After all, there are literally hundreds of apps for cooking, baking, and preparing that perfect meal from the random scraps of food lurking in the refrigerator.

Unfortunately, one particular gentleman took things a step further, with disastrous consequences. As the title describes, this rather amusing clip from a German comedy sketch shows a man and, presumably, his daughter, spending some quality time conversing in the kitchen whilst preparing a meal. The female is left aghast, however, when the man heads towards her with some chopped vegetables to contribute to the pot – scraping them off an iPad! 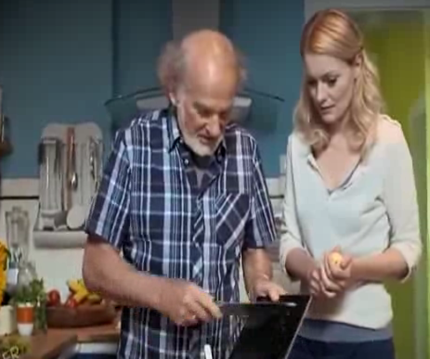 Of course, this isn’t the first time an elder person with apparent technical ignorance has been used for comedic effect, but it’s certainly one of the most humor-inducing. After scraping away the food, he then washes the device under the tap for a few seconds before placing in the dishwasher, ensuring the demise of  his very expensive chopping board as the female freezes, mortified.

Ultimately, the joke could be on the audience if he’s a secret early adopter of the revolutionary Liquipel technology, which claims to protect gadgets from water damage by using a “barely-there” invisible film to protect your device’s innards. Call it intuition, but somehow, though, we doubt this is the case.

Much like the other iPad destruction clips we’ve been treated to in the past week or so, this video prompts us to offer our own devices a reassuring look, as if to say "don’t worry, I’ll look after you – nobody can hurt you here!"

With the new iPad seemingly having a few issues with overheating and Wi-Fi, the chances of one being submerged in water or dropped on the floor in anger would probably be quite high just now. Let’s hope Apple resolves both lingering problems quickly in order to prevent a repeat of the battery saga seen with the iPhone 4S.