Believe it or not, and we still choose not to, but one young man has taken a more, helpless iPad and had at it with a couple of guns. The result? Utter devastation and, unsurprisingly, a devastated iPad.

Some people sat up until silly-o’clock hitting refresh on the Apple Store to get an iPad order in ready for last Friday’s release. Some even lined up outside brick and mortar stores in order to be the first to get their sticky little hands on a new iPad.

Then some people got a hold of a new iPad and then shot it. Lots. With a gun. Or two. 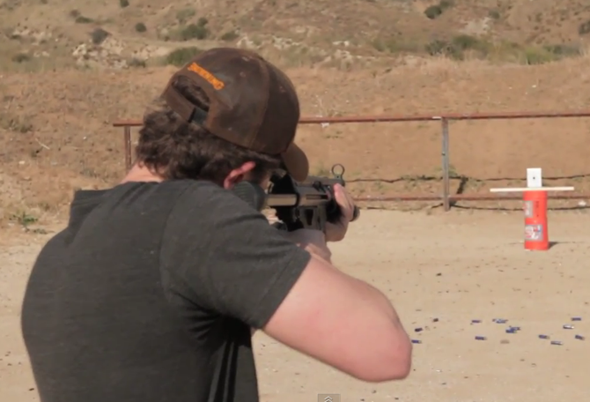 We’re all familiar with the strange people who like to buy expensive new gadgets and then destroy them in the street, usually in front of bemused onlookers. We even know all about the gentleman who takes difficult to get hold of toys and then subjects them to the insides of a blender. You know, just for kicks.

Now we’re going to become all too well acquainted with the man who likes to shoot new technology, and the new iPad is the latest piece of kit to find itself on the wrong end of a few well placed bullets.

Before you watch the embedded YouTube video, we must warn you: this video is indeed shocking, and anyone with more than an ounce of humanity in their cold, dead heart will feel sorry for poor Mr. iPad. Defenseless, he is subjected to round upon round of live fire, and alas, he succumbs to his injuries.

Or you might just like watching the crazy man shoot his new iPad. You pays your money, you takes your choice.

Those with a depraved love of all-things-destructive will also want to check out the latest iPad drop tests in which a new iPad is pitted against its older brother, the iPad 2. Again, broken glass and spilled innards ensue, though there are obviously less bullets and more floors involved.

It’s a crazy world we live in folks, just think, we could have had that either of those new iPads! Alas, we’d probably treat them too well.