How To Unlock / Lock Your Mac From Apple Watch

We told you about an app called MacID a little while ago, and it was already impressive at that point. Being able to unlock a Mac using Touch ID on your iPhone or iPad was awesome indeed, but with the introduction of the Apple Watch there was one feature addition that we all wanted for MacID.

Following an update that arrived today, the $3.99 App Store app now allows users to unlock their Mac using their Apple Watch. The whole unlocking process is just a case of tapping the icon that corresponds to the particular Mac that you want to unlock and that’s it. You’re in. 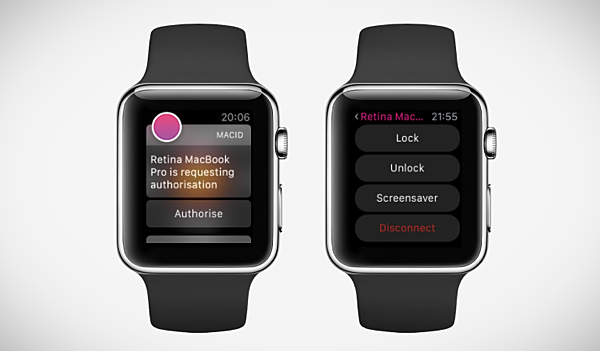 That alone is enough to make us recommend MacID already, but there’s more to it than just unlocking a Mac. Thanks to today’s update, Mac users can now have the contents of their clipboard sent to a Mac from their iPhone, see what track is currently being played from within iTunes or Spotify on the Mac in question and start the screensaver all from the MacID app. This all happens remotely, and without a single password being entered anywhere along the way. It’s how the future should be.

The update, which is now live in the App Store and is free for all existing MacID users, takes an already excellent app and takes it to the next logical conclusion which in this case is the Apple Watch. It’s also a good example of an app that translates well to the Apple Watch, especially given the inclusion of Glances for those of us that don’t tend to launch apps too often. If you own a Mac that supports Bluetooth LE then this app should be on your radar at the very least. We probably wouldn’t go out and buy a new Mac if Bluetooth LE isn’t present, but we’re not too far away!

If you think MacID doesn’t float your boat, then be sure to give Knock app a try as well, which lets you knock on your Apple Watch to unlock your Mac.

You can download MacID from the link embedded below.