Whenever we discuss the advantages of rooting, the term "kernel" is often thrown around at will. The fact of the matter is, many of those with rooted devices don’t even know what a kernel is, so in an attempt to clear the haze, a kernel is simply layer of code allowing your Android OS (and apps therein) to interact with your device’s hardware.

If you know what you’re doing, swapping out your kernel can be one of the more interesting ways to take advantage of your rooted device, with strong emphasis on the "if you know what you’re doing" part. If you do, then with the correct kernel, you can eke every bit of extra performance from your device – stretching it to the limit and garnering some fantastic results.

Conversely, if you are unaware of unsure of how the process works, an incorrectly-coded kernel could – like the html code behind a webpage, drag the whole infrastructure down, and adversely affect your battery life, camera functionality, even Wi-Fi.

Thus, kernels are usually only accessed and tweaked by kernel developers, and besides, there aren’t really any ways for general users to access them.

Naturally, a member of the XDA Developer forums has found away around this Android caveat. Member gokhanmoral has created an application allowing Samsung Galaxy S II I9100 users to view and alter some kernel functions to their own taste. 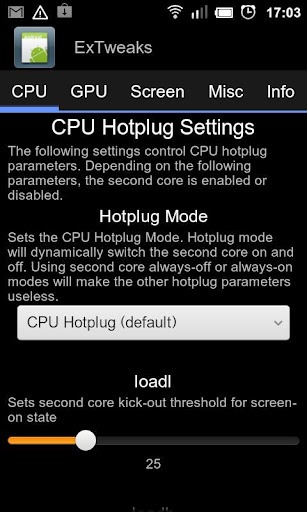 The good news is, said application looks to have huge potential, offering various modifications such as the ability to modify aspects such as GPU frequency. Moreover, it’s still in beta, and the dev has promised more features and functionality in the near future.

The slightly bad news, unfortunately, is that users will need to get a supported kernel in order to use it, but the developer will issue the documentation to obtain support from kernel devs, therefore allowing general users more kernel control than they’ve previously experienced. Since Apache Licensing offers regular developers the chance to create their own apps based on ExTweaks, essentially any developer can join an and start tweaking their kernel. 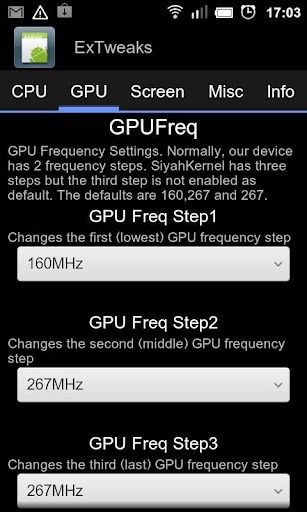 ExTweaks is a free download over at the Google Play Store, which is linked to below. Additionally, you may also want to check out the official thread over at XDA for further support.